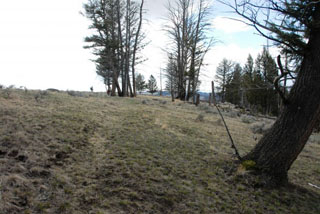 The once revered Howard Eaton Trail, in Yellowstone National Park, seems to have become a forgotten passageway through the park’s center. Scattered markers refer to the overgrown, now unmarked trail. A photo of Eaton atop Mount Danger, along with information about his early relationship with the park, was removed and not replaced.

Eaton was an early founder (perhaps the creator) of the dude ranch, the first of which he ran with his brothers in North Dakota, and later, Wyoming. The ranch in Wyoming is still in existence.

The 157-mile trail was dedicated to Eaton one year after his death, which occurred in the spring of 1922 from an infection after surgery on his appendix. Eaton and his brothers lead many journeys through the west and into Yellowstone, the first was in 1883. A friend of Theodore Roosevelt’s, Howard Eaton’s journeys to Yellowstone were responsible for bringing many people to the park; therefore, bringing in a lot of business in the early years of its existence.

Many hikers are still prone to explore the trail though at points it is hard to follow. The most well known section of the Howard Eaton Trail runs from Canyon to Fishing Bridge.