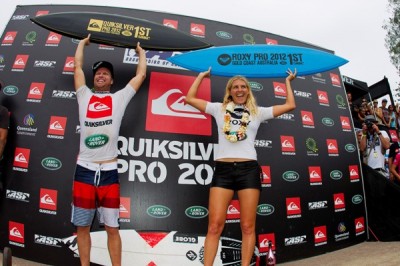 The opening stop on the 2012 ASP World Championship Tour, the Quiksilver and Roxy Pro Gold Coast enjoyed sunny weather, light winds and a capacity crowd for the final day of competition, with the world’s best surfers putting on a spectacular display of high-performance surfing.

Burrow defeated dangerous South American Adriano De Souza (BRA), 25, in a Final that came down to the wire. De Souza caught a wave in the dying minutes and launched into a massive air-reverse, requiring a 7.87 out of a possible 10 to take the lead. The judges deliberated until after the siren sounded and when it was announced that De Souza came a mere 0.27 short, Burrow was chaired up the beach and declared the 2012 Quiksilver Pro Gold Coast champion.

“I feel so good now!” Burrow said. “I had a really good event last year, but came up short in the Final against Kelly (Slater). Then today when I found myself against Adriano (De Souza), I was really nervous because he got me in a Final in Brazil last year. He’s really tough and I don’t like competing against him to be honest. There was a lot of weight on my shoulders in that Final so it’s pretty rewarding to come out on top.”

The ASP World Championship Tour will next head to Victoria, Australia for the Rip Curl Pro Bells Beach, stop no. 2 of 10 in the race for the 2012 ASP World Title.

“I’ve been going for the ASP World Title for a while now,” Burrow said. “I don’t know what to say. I just want to surf my best and hope that the rest falls into place. I love Bells. I love throwing on a full wetsuit and doing some big arcs in the Bells Bowl.”

De Souza finished runner-up at the Quiksilver Pro Gold Coast for the second time, after coming 2nd to Joel Parkinson (AUS), 30, in 2009. De Souza was easily one of the event’s top performers this season with gouging turns and inverted aerials taking him to a podium finish.

“I’m really happy with my result here today,” De Souza said. “It was such an amazing Final. Last year Taj (Burrow) and I had such a great heat here as well. It was one of the best heats of my life and he beat me. It’s amazing to be on the podium here again. In 2009, it was me and Joel (Parkinson). It’s a great way to start the year and I’m happy to be back up here.”

Stephanie Gilmore (AUS), 24, reigning four-time ASP Women’s World Champion, her fourth Roxy Pro Gold Coast title after defeating ASP Top 17 sophomore Laura Enever (AUS), 20, in a hard-fought Final. Gilmore was dominant throughout the event, posting scores in the excellent range in every encounter throughout the draw. Gilmore jumps back to No. 1 on the ASP Women’s World Championship Tour ratings, a spot she lost at this event last year after holding it for four years.

“To be carried up the beach with your friends underneath you with thousands of people around has got to be one of the best feelings in the world,” Gilmore said. “It took me back to 2005 when I won here as a grom. Last year went so quickly and it felt like I didn’t even exist on the rankings and that fire wasn’t really there. This year it’s so good to have that back! My cheeks are so sore from smiling already.”

Enever, who defeated Gilmore in the Quarterfinals of the Roxy Pro Gold Coast last year, today was unable to replicate last year’s magic but managed a career-best Runner-Up today against Gilmore. This is the first ASP Women’s World Tour final appearance for Enever, who finished 10th on last year’s ratings.

“Coming into this event I felt like a new competitor,” Enever said. “I’m so stoked to make it all the way to the Final. It was so good to be out there with Steph (Gilmore). She’s coming back now which is great to see. It’s a good way to start off the year. I’m in the ASP Women’s World Title race and it’s not a fluke. I want to be up here for the rest of the year and hopefully go one better next event.”

Kelly Slater (USA), 40, reigning 11-time ASP World Champion and last year’s Quiksilver Pro Gold Coast winner was eliminated in the Quarterfinals this morning by Josh Kerr (AUS), 27. Slater had previously defeated Kerr four times on the 2011 ASP World Championship Tour and was a favourite to take the heat today. However, it was Kerr who advanced thanks to one of a massive forehand air-reverse in the final minutes of the heat.

“If the waves were better I would be really bummed that I lost,” Slater said. “I got one at the end that I thought would be good, I went for the carving 360 and got stuck. Then I turned around and Josh (Kerr) was on a pretty nice one and he got that air at the end. He’s always going to be a threat in conditions like this where he can throw big airs. I got Josh a few times last year, we had four Quarterfinal battles last year where I got him, so he owed me a couple. It never feels good to lose, but I’m happy for Josh. I’m not sure if I’m going to Bells. I’m just going to go find some good waves in the next few weeks. Then I’ll figure out what I’m going to do for the year.”

Highlights from the Quiksilver and Roxy Pro Gold Coast are available via www.quiksilverlive.com/progoldcoast/2012