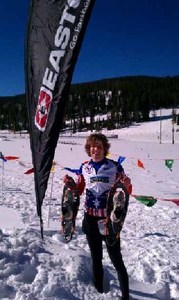 “Easton Mountain Products’ Vo2 Racing snowshoes felt incredibly light and durable. It felt like running and I have a big running background so it was natural,” says Liam Meirow, 16, who used the Vo2 Racing snowshoes for his first ever snowshoe race. “I felt without the snowshoes I wouldn’t have been able to compete the way I did. The VO2 Racing was light and quick and the technology provided a quick leg turn over, giving me a faster pace.”

“I started snowshoeing during the middle of my junior year of high school as an alternative to just running in the winter,” says Mitchell Kayson, 18. “The Vo2 are slightly larger compared to racing shoes offered by other companies and it allows me to float better when the courses aren’t well packed. Despite their larger size the Vo2 Racing snowshoes are the lightest ones that I have ever used, which is definitely an advantage in any race. Plus the direct mount system is really convenient.”

The Easton Ambassadors raced on new Vo2 Racing snowshoes. The ergonomic Vo2 snowshoes weigh only 1.3lbs each and feature a direct connect mounting system for a natural feel and full range of motion. This delivers fast maneuverability, extended comfort and better step tracking.