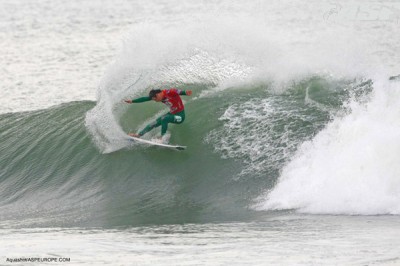 The 2012 Protest Vendée Pro, an ASP Europe 3-Star event was just officially confirmed and will be running from April 19-22, 2012 as the season’s first event in Europe.

The Vendée region and particularly La Sauzaie has been hosting surfing events for more than two decades now and is renowned for its famous A-Frame reefbreak that can offer perfect conditions to both surfers and the audience with a very close lookout and an ‘arena’ setup for the public.

“There has been a surfing competition here at La Sauzaie for more than 25 years now, and a Star event on the ASP Europe Tour for 11 years. It started small to grow as a 4-Star event up until last year. Financial difficulties have set us back a little bit in 2012 and the Protest Vendée Pro will be an ASP Europe 3-Star event, but we are strongly supporting the event and keeping our long-term goal of making it a major 6-Star event. We also wish to encourage Women’s surfing and this is why we launched last year the Bréti Girls Pro Junior event, that we renew in 2012. Our aim here is again to make it become a strong Star event for the Women.”

The Vendée area has always had a strong marine sports culture and heritage and the Vendée Pro completes the diverse offer of entertainment for the local, regional and national crowds.

“For us in Brétignolles, it is definitely one of the major events of the year. This competition represents exactly the values that our council wants to promote: Bretignolles has a strong, young image of a city close to sports, nature and off course the ocean. We are situated right between Les Sables d’Olonne who has the Vendée Globe, and Saint Giles Croix de Vie with the Figaro race, two major nautical events and we have earned our spot and reputation on the marine sports scene.”

As the 2012 edition approaches, Gilles Rousseau is confident that this new event will be a success and is looking forward to yet another strong field of competitors to invade the local community for a few days.

“I always find the man-on-man heats very exciting usually the semi-finals and final, but I have to say my most memorable moment in this competition is personal, 3 years ago when my 7 year-old daughter had the chance to go surf with the competitors !”

Tim Boal (FRA) 28, the 2011 Protest Vendée Pro champion, is also looking forward to this year’s edition of the event. Boal, who has been a professional surfer for more than a decade now, will return to defend his title with hopes of excellent conditions once again.

“It’s a pretty good wave for a competition, very close to shore etc. If there is swell we’re sure to have good conditions and that’s definitely a plus.. Sometimes it gets complicated with the tides but so far they’ve always managed to finish the event in good conditions.”

Boal will approach this 2012 edition of the Vendée Pro with a more relaxed attitude, having started to slow down on the contest scene, selecting events that he enjoys particularly.

“I’ll be coming back for sure to defend my title and because my sponsor organizes this event. But in general this year I’m probably only going to do a few selected events. I’ve been on Tour for about 10 years now and it was incredible, I’m very happy with all the experiences I’ve had. But things change and I have the opportunity to start something different now, see more of the places I travel to, you know that’s always the problem when you travel to an event, stay there for a week and don’t see much of the surroundings.”

The 2012 Protest Vendée Pro will be running from April 19-22, 2012 in Brétignolles sur Mer, France. To find out more, please visit www.aspeurope.com