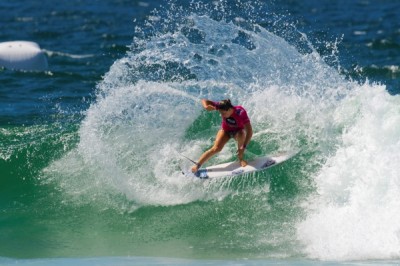 The Quiksilver Pro and Roxy Gold Coast presented by Land Rover, the opening stops on the 2012 Men’s and Women’s ASP World Championship Tours, today whittled the field down to the just eight men and four women with the world’s best surfers tested in tricky two-to-three foot (1 metre) surf at Snapper Rocks.

Tyler Wright (AUS), 17, runner-up at the 2011 Roxy Pro, eliminated reigning ASP Women’s World Champion and defending event winner Carissa Moore in a re-match of last year’s Final. Wright was ferocious in her assault on the waves at Snapper Rocks, posting two excellent scores en route to causing the biggest upset of the event.

“I knew I had to do something big to beat her,” Wright said. “She’s the ASP Women’s World Champ. I think she won three events last year so I knew it was going to be tough. I was lucky enough that I got the good waves. If she got them she would have smashed me too.”

Wright will face compatriot Laura Enever (AUS), 20, in the Semifinals of the Roxy Pro Gold Coast when competition resumes.

Sally Fitzgibbons (AUS), 21, 2011 ASP Women’s World Runner-Up, clocked a pair of scores in the 8-point-range to eliminate newcomer Malia Manuel (HAW), 18, in today’s Quarterfinals. Manuel would end up with Eqaul 5th and bragging rights as the highest placed rookie at the 2012 Roxy Pro.

“That was a really good result to start the year off,” Fitzgibbons said. “Yesterday I was struggling with my board choice and wave selection and it’s good to fix that up. It was really nice out there with really fun waves. I’m feeling fired up. I’m still finding my feet after having not too much surfing time in the off season with a wrist injury, but it’s all coming together and I’m looking forward to the Semifinals.”

Fitzgibbons will take on four-time ASP Women’s World Champion Stephanie Gilmore (AUS), 24, in the Semifinals when competition resumes. The Gold Coast natural-footer seems to have found her form at the Roxy Pro Gold Coast and will be a dangerous draw when the event recommences.

Adriano De Souza (BRA), 25, won the first three-man, non-elimination heat of Round 4 of the Quiksilver Pro. The lead changed multiple times between De Souza, Owen Wright (AUS), 22, and Josh Kerr (AUS), 27, with the Brazilian taking out the two Australians and advancing directly into the Quarterfinals.

“I just tried to concentrate on my myself because Owen (Wright) is one of the form surfers of this event and Josh (Kerr) can also do some damage out there,” De Souza said. “I tried to catch the best waves and sometimes luck is on your side and it worked out for me in that one. I’m stoked to skip Round 4 and move straight into the Quarterfinalss.”

De Souza will once again face Owen Wright (AUS), 22, who went on to win his afternoon Round 5 heat, in Quarterfinal 1 when competition resumes.

Kelly Slater (USA), 40, reigning 11 x ASP World Champion and last year’s Quiksilver Pro winner, didn’t take his foot off the gas in his morning Round 4 heat win. The iconic Floridian built momentum throughout the affair, even changing equipment mid-heat to adjust to the conditions.

“On that first wave I could tell my board didn’t have the pop I wanted,” Slater said. “Because the waves are so small, you need a small board to fit in the pocket, so I switched to a shorter, wider board. None of us really got in sync in that one. It was really tough to pick the right waves. I only woke up 40 minutes before my heat. I thought we were going to be off today so I was sleeping in and I got a call saying ‘get up, we’re on.’”

Jordy Smith (ZAF), 24, edged out Joel Parkinson (AUS), 30, and Miguel Pupo (BRA), 20, in an exciting Round 4 exchange at Snapper Rocks. Smith and Parkinson put on an epic show for the crowd and finished the heat with only 0.14 separating their score lines.

“I wanted to beat Joel (Parkinson) bad,” Smith said. “He has beaten me pretty much my whole life, so I’ve got a lot to get him back for. He’s also one of my favourite surfers so it’s tough to come up against him. Miguel (Pupo) is another tough one because he’s got all the tricks in the book. Choosing the right waves is pretty key out there.”

Joel Parkinson (AUS), 30, two-times Quiksilver Pro event Champion posted the event’s first perfect 10-point-ride in 2012 in his afternoon Round 5 match. Parkinson battled Julian Wilson (AUS), 23, for a Quarterfinal berth in glassy conditions this afternoon and the local natural-footer was in unbeatable form.

“I got stung by a blue-bottle and that fired me up!” Parkinson said. “There’s still some good waves out there and I thought we were going to have an air-off. Julian (Wilson) did some, and I tried a few, then that one came through and it had some good air sections, but they were better turn sections. I’ve got some rivalries going today – I surfed against Jordy (Smith) and we have a good one going, now Julian and I are one building too. That’s what makes healthy competition. You’re happy to get involved in a real rivalry.”

“It was pretty much a 9-point-wave by itself and I just rode it,” Burrow said. “I got one good turn out the back and then one good one on the end. The judges like a good start and a good finish, so I knew it would be up there. Once I had that 9, I just really wanted to back it up with something solid. It’s pretty tough out there, but I managed to find another good score.”

Event organisers will reconvene tomorrow morning at 6:30am to access conditions for a possible 7:30am start.