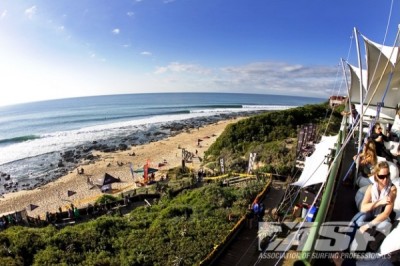 The Billabong Pro Jeffreys Bay, Event No. 5 of 11 on the 2012 ASP World Championship Tour, has been officially downgraded to an ASP 6-Star event for 2012.

In an official statement today, Billabong said: “The change in event status follows a broader review in which we are seeking to identify cost savings throughout the business. By retaining an event at Jeffreys Bay, it now provides two qualifying events back to back in the South African region. The move to an ASP 6-Star also opens the event up to South Africa’s aspiring pro surfers for the first time in 20 years and ensures continuity of the event for the local businesses in Jeffreys Bay.”

The downgrade drops the 2012 ASP World Championship Tour calendar from 11 events to 10, with surfers now counting their best 8 out of 10 results towards their ASP World Title ranking.

“We agreed as a Board that whilst very regrettable, the commercial realities are such that a pragmatic approach by ASP at this time seemed sensible,” Richard Grellman, ASP Executive Chairman, said. “Billabong have been long-time supporters of professional surfing and still sponsor three of the ten World Championship Tour events and we look forward to our deep relationship with them continuing.”

The 2012 ASP World Championship Tour will commence this Saturday, February 25, 2012, with the Quiksilver and Roxy Pro presented by Land Rover.

The event will be webcast LIVE on http://www.quiksilverlive.com/