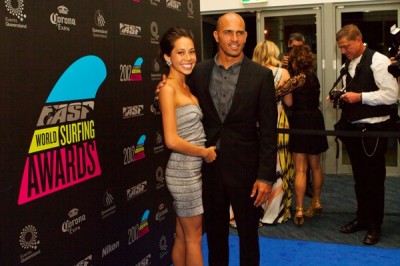 The 29th Annual ASP World Surfing Awards went off tonight at the Gold Coast Convention and Exhibition Centre with the world’s best surfers trading the beachwear for formal attire as the 2011 ASP World Champions were officially crowned.

“I have actually been on tour longer than some of my fellow competitors have been alive,” Slater said. “All joking aside, it’s truly humbling to be up here and honoured in front of such an incredible collection of surfers. I want to thank everyone in the room for pushing me to where I am.”

In addition to honouring the 2011 ASP World Champions, the ASP World Surfing Awards included new accolades voted on by the fans and the surfers themselves.

For the first time in several years, ASP Life Membership was awarded to Hawaiian legend and icon of high-performance surfing, Larry Bertlemann (HAW), 56.

“Where surfing is today is where I dreamed it should be in the 70’s,” Bertlemann said. “You guys absolutely deserve this and I’m so honored to be up here in front of you all tonight.”

Grammy Award-winning artists Wolfmother and The Vernons rounded out the night’s entertainment which was all streamed LIVE around the world on YouTube.com.

Highlights will soon be available via http://www.aspworldtour.com