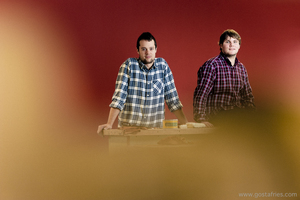 It has been 47 years since Sweden last certified a glove maker. It was therefore significant when HESTRA Gloves’s Anton Magnusson and Niklas Magnusson received their journeyman certificates in glove making on February 9, 2012. As a result, the number of certified glove makers in Sweden doubled.

“We’re proud to be able to carry a unique craft tradition onward,” says Niklas, who along with his cousin Anton belongs to the fourth generation of the HESTRA glove company.

Anton Magnusson and Niklas Magnusson, both 22, have spent three years studying with Anders Malmgren, 78, who has been one of two sole expert glove makers in Sweden for a long time. They have also practiced regularly in Hungary and Romania, which are currently two of the world’s leading countries in the profession.

The two cousins hope the title will not only be personally significant, but that they can also help carry the unique expertise onward. The glove making craft is nearly extinct in Sweden and sharply declining in the rest of Europe.

“Because of competition from low-wage countries in the 1950s and 1960s, the craft has essentially completely died out,” says Anton.

Their passion for handicrafts and glove making is no coincidence: Anton and Niklas belong to the fourth generation of the 75-year old glove company HESTRA, which is in over 20 countries. The company is best known for its sport gloves, but is also growing in the fashion glove industry. Anton and Niklas’ skills will therefore be valuable.

The cousins also study at the Swedish School of Textiles in Borås and at Lund University, respectively. They intend to use their education and unique expertise in glove making to run the 75-year old family business in the future. Anton and Niklas have one brother each, Jonas Magnusson and Jacob Magnusson, who are also active in HESTRA in various ways.

About the journeyman test:

The journeyman test is carried out in accordance with the test rules established by the industry and the Swedish Craft Council. The review is conducted by extremely knowledgeable and experienced glove making representatives and the Stiftelsen hantverk och utbildning [Handicrafts and Training Foundation]. The exam consists of a practical and a theoretical test that are carried out in the same day.

Anton and Niklas Magnusson both belong to the fourth generation of the Magnusson family working at HESTRA Gloves, and actively participate in managing the company.
“In order to grasp the breadth and evolution of glove making, from a strictly hand-made good to today’s more mechanical production process, knowledge and expertise about the handicraft itself are essential. Another crucial component of the job is to be able to professionally communicate with designers, individuals who are responsible in production, and most importantly, the skilled employees who are the key to the actual production of high-quality gloves.”