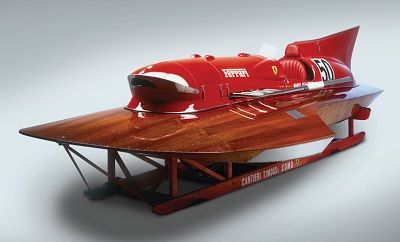 RM Auctions is delighted to announce the consignment of the world-famous Ferrari-engined Hydroplane racing boat, ARNO XI, to its highly anticipated Monaco auction, 11th – 12th May, 2012.

A unique piece of history, ARNO XI joins an elite roster of blue-chip automobiles and motorcycles slated for the multi-day sale at the Grimaldi Forum. Held during the same weekend as the Grand Prix de Monaco Historique, RM’s two-day, biennial Monaco sale follows a record-setting debut auction in 2010 which saw the Company achieve over €33 million in sales, with bidders representing more than 33 countries from around the world. This year’s event is set to continue the momentum, bringing together a magnificent roster of collectible vehicles with the world’s most discerning collectors.

“We are thrilled to be offering the historic ARNO XI at our Monaco sale. This awe-inspiring racing boat has beauty, history, provenance and performance; it simply ticks every box for any serious collector,” says Peter Wallman, specialist at RM Europe.

ARNO XI was the brainchild of Achille Castoldi, who, wanting to establish a world water speed record, set about developing the ultimate powerboat. During 1952 and 1953, Mr. Castoldi, a friend of the famous Ferrari Grand Prix drivers Alberto Ascari and Luigi Villoresi, succeeded in convincing Enzo Ferrari to provide knowledge and technical assistance to develop the boat. The result was horsepower provided by a 12-cylinder, 4,500 cc V12 Ferrari engine, the same as that installed in the Type 375 Grand Prix car that gave José Froilán González Ferrari’s first ever World Championship Grand Prix Victory at Silverstone in 1951, with the only addition being twin superchargers that developed in excess of 502bhp at 6000rpm. On 15th October, 1953, ARNO XI achieved 241.70 km/h (150.19 mph) on Lake Iseo in northern Italy, establishing a world speed record for an 800kg boat. The record, incredibly, still stands today.

When Castoldi was finished with ARNO XI, it was sold to Nando dell’Orto, who went on to race it with great success for more than 10 years, securing numerous wins. The boat went through various aerodynamic improvements during that time, including a modified nose and the addition of a fin, finishing its competitive racing career in 1960 with a European championship victory and numerous fastest laps, many of which still exist.

The current owner acquired the racing boat over 20 years ago, restoring it to concours condition. ARNO XI has been in the water many times since and is not only an impressive sight when seen in action but also sounds magnificent. Well-documented, its sale is accompanied by an extensive history file including numerous period photographs and hand-written notes from the great Ferrari engineer, Colombo, during tests on Lake Iseo and during bench testing at Ferrari’s Maranello factory. This remarkable and unique machine is estimated to achieve between €1.000.000 – €1.500.000 when it crosses the auction podium in May.

“It’s an exceptional piece of history, made even more famous by the countless models one sees of it in important collectors’ libraries and is likely to appeal to serious car collectors as much as it will to traditional boat collectors,” adds Wallman. “It has that alluring mix of ’50s Ferrari grand prix car with the sheer beauty and simplicity of the hydroplanes of the period. We are honoured to have been entrusted with its sale,” he continues.