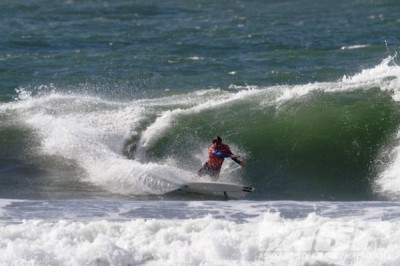 Joel Parkinson (AUS), 30, was ASP World Runner-Up last season…an accolade he’s held on four occasions now (2002, 2004, 2009, 2011). That kind of record, getting within reach of the ASP World Title so many times, would buckle a lesser man. However, Parkinson is not a lesser man. He’s a man with 10 elite tour wins, a threat in any and all conditions and regarded as one of the most stylish surfers to ever set foot in the ocean. With the forthcoming Quiksilver Pro Gold Coast poised to kickstart the 2012 ASP World Championship Tour season, Joel has opened up about the ASP World Title, going without a coach this season, his equipment, Snapper Rocks, the pressure on the new guard, amongst other things. This…is his story…

You finished runner-up in the world title last year and made the last two finals. Did you take a lot out of last year?
I guess, sure. You can only take confidence out of finishing second in the world. A world title is still my goal and I’m still right in the mix, and finishing runner-up I should take a lot of confidence out of that going into this year. And anything could happen now – that’s my attitude – anything could happen because it’s surfing after all.

Did we see the best of your surfing at the back end of last year?
There’s always room to improve your surfing but some of the best stuff happened when it became mathematically impossible for me to win the world title. The favourite parts of my surfing happened at the back end. My surfing at the back end of last year felt free spirited, felt so good, it felt kinda right. I’d been putting a lot of pressure on myself up till that point but as soon as it lifted my best surfing happened. I had an open-minded end of the year, and this year I’m going to take that attitude with me. It’s not like I’m going in totally unprepared – I’ve been doing a lot of work on my surfing – but I’m going into 2012 with an open mind.

Is all the hype being directed at the new generation of young guys on tour a blessing in disguise for older guys like yourself?
Absolutely. I’m sure it takes a lot of pressure off Kelly and the older established guys. Those young guys are unbelievable with what they’re doing and their surfing is worthy of the hype, but I’m happy for them to have it. I think we all went through that when we were younger, the whole hype thing it comes and goes, but I guarantee this year or next year the Medinas, the John Johns, the guys coming through like Yadin, they’ll break the Top 10 and be there quite a while.

How is your surfing evolving to deal with those guys?
There are probably a few points in my surfing that are still evolving, my aerials I suppose, but the thing is everyone has their strength and weaknesses and that’s the beauty of the mix of guys on tour. I think with the waves we’ll get on the tour this year, the stops we have, we might see some of the young guys discover they have a few weaknesses at certain places. Those guys are pretty good all round, but when you go to a new break you’ve got to get your head around it, and we haven’t seen either John John or Medina at the start of the year yet so it’s a little uncharted for them. J-Bay, Bells, we haven’t seen them there yet. Tahiti, Fiji, you know John John will probably be really good there. But it’s till their first time surfing an event there and you have to learn the wave while surfing it in a heat which is a different thing altogether.

Are you predicting a tough year for the judges?
For sure. I would have hated to be a judge down at the Australian Open at Manly. That was a really hard event to judge; it was tiny and every wave guys were throwing air reverses. It was hard to pick what air reverse was better than the other. This year on tour the judges will have it a bit easier at places like Cloudbreak and where good surfing wins heats and it’s pretty easy to say what that is, but at beachbreaks when it’s smaller and the surfing tightens up and there are more tricks and airs they’ll have to really have it sorted out, because sorting one air from another becomes really technical.

For the first time in a long time there is no clear world title favourite. Would you agree?
Definitely. There are guys who aren’t being talked about that much. Everyone talks about Kelly and some of the younger guys, but everyone seems to have forgotten about Jordy Smith in that equation. Jordy is a dark horse. A lot of people are talking about Owen because he went from strength to strength last year. He will be up there, and Julian Wilson is surfing amazingly and the thing is he really wants it. You can tell. And then you have the usual suspects. Mick has been training really hard and surfing really hard, and I’m sure Taj’s name should be in there too.

Does the world title keep you awake at night like it used to?
I sleep like a baby. I sleep fine. If the world title happens, it happens. If I’d never have given it my all I’d definitely be thinking about it too much, but over the past three years I’ve given it everything I’ve had and that’s all I can do. World title or not I sleep fine…unless the kids wake me up.

And the one big change to your regime this year is no Luke Egan on tour with you as coach.
Louie has given me so many awesome insights over those three years, so much knowledge and so many good ideas. He’s got so much confidence and insight into me and my equipment, what I can ride and when I should be riding it and what works for me. But I’ve got all that stuff in my black book now, all the stuff he’s shown me and we’ve worked on, so while I owe him a big debt of gratitude I reckon I’m ready to go out there on my own and see how I go.

Have you tweaked your boards at all for 2012? Anything radically different?
At Manly I was riding this little JS Rock ‘n’ Roll model with a little swallow tail. He shaped one for himself six months ago and I stole that off him and loved it, and he’s developed that board to the point where I can surf it in heats if the waves are small and fun. I prefer to ride a normal shortboard in perfect six foot waves, but we’re going to get heats this year where the surf might be pretty average so I know I’ve got a really good groveller if that happens.

You mentioned the intensity of the past three years and how hard you’ve gone at the world title, and you mentioned how liberating it was at the back end of last year once that world title dream was gone. How much of that mindset are you taking into this year?
I just don’t want to go back into how hard I was training there for a while. Some weeks I was training more than I was surfing, and this year I’ve tried to flick the switch and swap them around and do a lot more surfing. I probably won’t go into the new season with exactly the same head space I had at the back end of last year – I want to surf smart and I don’t want to be blasé about it – but I definitely want to take some of that freedom I had late last year and channel it.

And onto Snapper, you’ve hardly surfed there at all over summer because there’s been no sand. What are your thoughts on what we’ll see there later this week?
There’s been no sand at Snapper at all, but a week is a pretty long time out there when they start pumping. There are little waves there but I can’t see it being epic Snapper. A week out it needs a lot of help. But D-Bah has a great bank on the wall and that’s pretty much where I’ve surfed all summer, but in a perfect world I’d love to see a big six foot east swell and have the contest down at Kirra like we did down in ‘09. If we got a good day down there it’d be amazing.

What do you think Kelly will do this year? Have you thought about it?
No, not really. He’ll surf at Snapper but beyond that who knows. It’s always good to have him there, but if he decides to walk away I’m sure he’s going to find some good waves somewhere else.

And Dane’s got the wildcard at Snapper.
He’s by far the most exciting surfer in the world right now and I’m really interested to see how his surfing has evolved in the past year because we haven’t seen that much of him. I just hope he doesn’t evolve too much in a heat against me like he did last time!

And give me the name of one guy who will surprise us on tour this year.
Brett Simpson. I really like the way he surfs and he’s hard to beat. It took him a year or two to mature into the tour, but he looked great at stages last year and I’m interested to see how he goes this year.