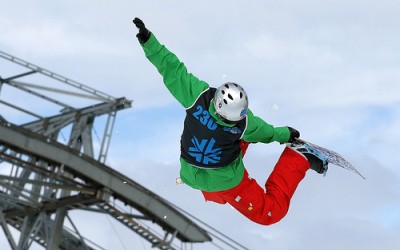 The World Snowboarding Championships halfpipe finals went down today at Oslo Winterpark where Iouri Podladtchikov (SUI) and Kelly Clark (USA) were officially crowned the 2012 Halfpipe World Champions.  After a week of excellent riding in qualification rounds, Iouri and Kelly beat out an international field of very talented riders and were awarded with the Halfpipe World Champion trophy and $40,000 USD for their exemplary performances.  On the men’s side, Matt Ladley (USA) finished in a close second place and Louie Vito (USA) ended his week in third.  For the women, Queralt Castellet (ESP) came in just one point behind Kelly’s score in second place and Gretchen Bleiler (USA) completed the podium in third.

After sunny weather all week, riders had to deal with less than ideal conditions with some fog and rain but the riding level remained extremely high all afternoon and into the evening.  Iouri Podladtchikov won tonight’s competition with an impressive run that consisted of a backside double cork 1260 mute, frontside double cork 1080 truck driver, Cab double cork 1080 mute and ended with a frontside 1080 tail.  He had this to say about the competition, “I’m super happy that this was such an amazing event.  It was so cool to ride.  I gave it my best and it worked out.  This being the World Championships, it’s a sweet, sweet victory.”

For the women, Kelly Clark took her 15th straight halfpipe win in a row with a run made up of a frontside air, backside 540 mute, frontside 1080 mute, Cab 720 mute and ended with a frontside inverted 720.  Kelly was very happy with her victory tonight saying, “It’s an honor to win the first TTR Halfpipe World Snowboarding Championships, I’m coming off a pretty incredible winning streak right now and winning this event is really just the icing on the cake.”  Commenting on the level of competition, Kelly continued, “The level of women’s riding was absolutely incredible tonight and I think that was the most remarkable part of the contest.”