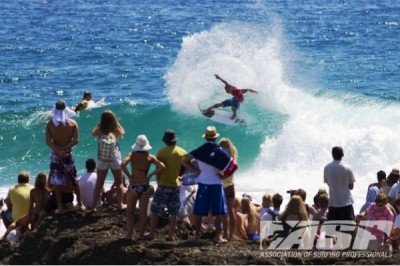 Kelly Slater (USA), 40, 11-time Association of Surfing Professionals (ASP) World Champion, has categorically dominated the sport of surfing for the past two decades. The Floridian has collected an astounding 48 elite tour wins throughout his tenure amongst the world’s best surfers and holds virtually every record the surfing world has to offer.

The question on everyone’s mind at the moment is “will Kelly put in a full year at the elite level of competition to defend his throne?”

Historically coy when discussing his annual plans, Slater’s commitment status of “full-time” to the ASP World Title Series traditionally rests upon his performance at the opening event of the season, the Quiksilver Pro Gold Coast presented by Land Rover – an event he’s won on three previous occasions (2006, 2008, 2011).

“There have been years when this approach has been a little frustrating but it’s also sort of a wildcard way of deciding,” Slater said. “I’ve had good success on the Goldy and this year should be fun again. I can’t wait to be there. I’m undecided as to whether I’ll apply full time (to the 2012 ASP World Title Series). That’s probably no secret. I’ll go by feel and whatever feels right internally, I’ll stick with that.”

While considered a “citizen of the globe” due to his extensive travels, Slater’s primary residences during this past offseason have been Southern California and the North Shore of Oahu. With an abundance of swell hitting both locations throughout December, January and February, the iconic natural-footer has had plenty of opportunity to ready for the opening event of the year at Snapper Rocks.

“I usually finish prepping for the start of the year by surfing Rincon,” Slater said. “It’s easy to tune in boards quickly there to know what you’re dealing with. I’ve been scoring a lot of surf last few weeks. Probably more water time than normal. I haven’t been riding shortboards a lot though, focusing on mostly barrels and not necessarily performance so I’ll have to tune in to what I’ll have to do in Oz.”

Although having recently turned 40, Slater feels few, if any, physical deficiencies and generally believes he is a stronger all-around surfer and competitor than he was when he first commenced his touring back at age 20.

“I have a few nagging injuries but overall I’m pretty good,” Slater said. “I hurt my ribs pretty badly a couple weeks back but they should be okay by Snapper time. I do feel a little bit of issue there, but I’m planning on being healthier and stronger in the coming years. I’m much better all around now than when I was 20. Probably the hold back is the overall desire to improve day to day. I focus more on enjoying my surfing than expanding day to day, but I still get kicked into gear when I see what everyone is working on and doing. Being in the environment on tour with the guys gets you going pretty quickly.”

The 2012 ASP Top 34 will see a historic age disparity of 23 years between the oldest surfers at the elite level and the youngest. As a new generation of surfers readies to do battle on the ASP Dream Tour, Slater is excited to see how performance levels will continue to soar as well as the how the dynamics of the 2012 ASP World Title race unfold.

“Of course I’m excited to see guys like Dane (Reynolds) and Kolohe (Andino) and Gabriel (Medina) and Julian (Wilson) and Miguel (Pupo) and Josh (Kerr),” Slater said. “Then the usual suspects: Joel (Parkinson), Mick (Fanning), Taj (Burrow), etc. We’ll surely be hearing talks of ASP World Title threats within weeks and it’ll be fun to watch it pan out and see who steps up to the plate and who has trouble dealing with it. It’s always an interesting start to the year.”

The Quiksilver Pro Gold Coast will run from February 25 through March 7, 2012 and will be webcast LIVE via http://quiksilverlive.com/progoldcoast/2012

Running in conjunction with the men’s event will be the Roxy Pro Gold Coast presented by Land Rover, the opening event in the ASP Women’s World Title season.