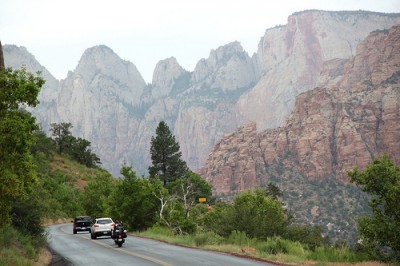 Climbing routes on cliffs used by nesting Peregrine Falcons in Zion National Park will be temporarily closed beginning March 1, 2012, in order to protect the nesting success of this bird which is in recovery from “endangered species” status. The closing date is based on analysis of information collected from 2001-2011 regarding the peregrines’ arrival time to their nesting cliffs in the park.

The following cliffs will be closed to climbing beginning March 1, 2012:

Angels Landing, Cable Mountain, The Great White Throne (beyond single- and double-pitched climbs), Isaac (in Court of the Patriarchs), The Sentinel, Mountain of the Sun, North Twin Brother, Tunnel Wall, The East Temple, Mount Spry, The Streaked Wall, Mount Kinesava, and the Middle Fork of Taylor Creek. All other cliffs will remain open to climbing.

Park biologists will monitor the nesting activity of Peregrine Falcons in the park throughout the 2012 breeding season. Cliffs that have been closed but are not being used by nesting peregrines this year, will be reopened when nest sites have been determined, typically by late April or early May.

Those cliffs being used this year will be monitored until the chicks fledge, usually in late July, and then will be reopened to climbing.

Zion National Park is home to a high concentration of breeding Peregrine Falcons each spring and summer. These magnificent birds of prey were listed as an “endangered species” in 1970 under the Endangered Species Act. Their decline was primarily due to pesticides like DDT, which caused the female to lay thin-shelled eggs that were easily broken, killing the developing embryo inside. Thanks to the U.S. ban on DDT in 1972 as well as the success of captive breeding programs, peregrine populations recovered across North America and the species was delisted in 1999. Zion National Park has been and continues to be an important sanctuary for peregrines and other species. Even when peregrine populations were plummeting elsewhere, they continued to successfully nest and raise their young on the tall cliffs found in the park.

For up-to-date information on the status and maps of the closed climbing cliffs, please check the Zion National Park website at www.nps.gov/zion/planyourvisit/climbing.htm. Climbers are responsible for checking the specific maps of the closed areas. The website will be continuously updated as cliffs are reopened.