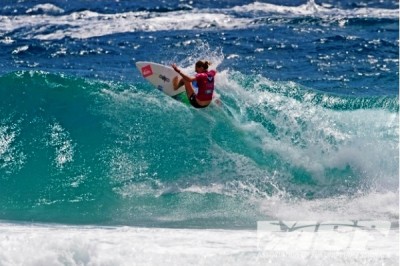 Stephanie Gilmore (AUS), 24, is already an icon within the women’s sporting world after her short five-year tenure amongst the world’s best surfers. A four-time ASP Women’s World Champion, the young Gold Coaster has already scalped an incredible 18 elite tour events, including three at the opening event of the season, the Roxy Pro Gold Coast presented by Land Rover.

“I’m a competitive person,” Gilmore said. “I want to be the best. I feel like I’ve already accomplished more (competitively) than I ever thought I would and I’m proud of that. There’s nothing forcing me to compete, I do it because I enjoy it and because I want to win. If you’re winning events, you’re winning world titles so yes, the world title is still very much the goal.”

In a departure from her normal routine, Gilmore’s offseason has complimented the usual intensive training regime with a number of humanitarian efforts, primarily to Senegal early this season.

“When I’m at an event, then yes, my focus is on winning,” Gilmore said. “However, competition has never defined who I am and it definitely doesn’t absorb as much of my life as it used to. I love to be inspired by worlds outside of this industry. Earlier this year, I went to Senegal on a humanitarian mission with the Quiksilver Foundation and, for me, it was one of the most transcendent experiences of my life. Travelling around the world for a reason other than chasing waves was definitely something different and getting involved with the people there who don’t have much but still manage to be incredibly happy was pretty eye-opening. I guess revelations like this aren’t exactly uncommon, but actually experiencing it firsthand is something that has re-shaped my outlook quite a lot.”

“Carissa (Moore) is a really impressive surfer,” Gilmore said. “I don’t think anyone was surprised that she started doing so well on tour as we’ve all watched her grow up and saw her coming down the tracks for a while. She can do it all: big turns, fin releases, airs, barrels and she has a pretty impressive rhythm throughout all her surfing. Last year, she showed how dangerous she can be and there are not a lot of events on tour so every one counts. If you stumble early on, you need to make up the ground quickly or else Carissa or someone else could runaway with the tour.”

In addition to Moore, Gilmore recognizes the talent brewing amidst the remainder of the ASP Top 17 as well as the challenge of having a truncated season once again. With seven events on the current schedule, Gilmore acknowledges the importance of every event and the impact they all have to the ASP Women’s World Title race.

“It’s safe to say that the current ASP Top 17 are the best girls we’ve ever seen on tour,” Gilmore said. “Any of the girls can beat any of the other girls in a heat and it’s an exciting thing to watch. Obviously, I think the tour needs to be more robust and a bit more stable. I had a lot of challenges heading into last season and at the top of them was the fluctuating schedule. Events were changing and dropping off, and when the dust settled, we had seven events and a season that finished in August. It makes it difficult to plan a title campaign and goes to show that every event counts, especially the early ones.”

The Roxy Pro Gold Coast will run from February 25 through March 7, 2012 and will be webcast LIVE via http://quiksilverlive.com/progoldcoast/2012

Running in conjunction with the women’s event will be the Quiksilver Pro Gold Coast presented by Land Rover, the opening event in the ASP World Title season.