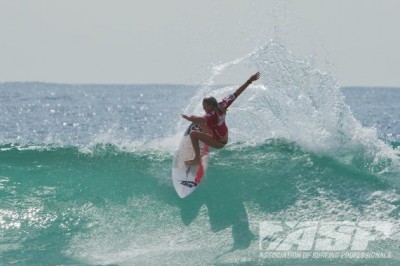 Today the Australian Open Of Surfing at Manly Beach presented by Hurley and Billabong saw the world’s best female surfers hit the water and put on an impressive show for the revellers on the beach and online. With critical points and prize money on offer the competition was fierce for the opening round of the women’s ASP 6-Star division.

Laura Enever (AUS), the Sydney Northern Beaches local showed that a six month break from competition hasn’t slowed her down, posting a massive 17.60 (out of a possible 20) in her opening heat of 2012. Enever finished 10th in the world in her rookie year competing for the ASP Women’s World Title last year, and has been working hard in the off season to improve on that for 2012.

“This are the best waves I’ve ever had at Manly!” Enever said. “It’s been a long time since my last heat last year, so I started to prepare early this year because I remember how fast it all goes. I guess that preparation has paid off because I felt good, I had a clear mind and felt like I was surfing well, so I’m stoked to start the year off that way. It’s also great to have the hometown support with friends and family here on the beach.”

Lakey Peterson (USA) went from 4th place to first in the last 5 minutes of her opening round heat at the ASP Women’s 6-Star Australian Open Of Surfing today, thanks to two impressive rides. This was Peterson’s first heat since her Runner-Up finish at the US Open in August last year.

“This is actually where I leant to surf when I was 5-years-old at Manly Surf school,” Peterson said. “I love coming back here because it’s where I stood up on my first wave and it brings back great memories. That heat was scary, I was never in the right spot, but I’m stoked to get the score. I’m just hoping I’ve had my bad start, and that it’s all up from here.”

Sally Fitzgibbons (AUS), runner-up to the 2011 ASP Women’s World Title was on point for her first heat of 2012. Surfing with an injured left wrist didn’t hamper her performance, as she posted the highest heat total of the day – 17.83 (out of a possible 20).

“It’s great to be here in Sydney for the Australian Open!” Fitzgibbons said. “It’s been a while since I’ve been in the water because of my wrist, so it’s great to be getting back into it. This is a great warm-up for the first ASP Women’s World Title event on the Gold Coast. The wrist is feeling good, I’ve got a little guard on it to help stand-up and duck dive. It’s mending slowly and I’m expecting that it should be alright by the Roxy Pro.”

Coco Ho (HAW) used her powerful and stylish approach to claim an easy win in her opening heat at the Australian Open Of Surfing today. Ho is excited to be back in Australian for the start of the 2012 ASP World Tour leg.

“It feels amazing to be here and have our first event of the year be one of this magnitude, it’s huge!” Ho said. “I’m so excited for this first event, my adrenaline is going and I’m psyched for the whole year. I’m lucky that during the downtime a lot at the action was at home in Hawaii, I also took some time off to go snowboarding. But since then I’ve been training and working hard to get ready for 2012.”

Bianca Buitendag (ZAF) caused the upset of the day eliminating Tyler Wright (AUS), 2011 ASP Women’s Rookie Of The Year Tyler Wright. Buitendag scoured the line-up and found the best waves of the heat and surfed smooth and sharp.

“The conditions were quite tricky in that heat,” Buitendag said. “The tide is really high right now, the waves looked great earlier, but they’re a bit of a gamble at the moment. This is my first year competing after finishing school and I’m looking forward to just surfing my brains out and trying to get some good results.”

Bethany Hamilton (Kauai, Hawaii) was eliminated in a tight heat this morning. Hamilton surfed strong, but was out of sync with the ocean and was unable to find the waves that offered the most scoring potential.

Tomorrow the Australian Open Of Surfing will see the start of the Men’s ASP 6-Star rated event and will also feature skating competitions and demos, music concerts, athlete signing sessions and much more. The event is free for the public to view in person and live on the internet via australianopenofsurfing.com