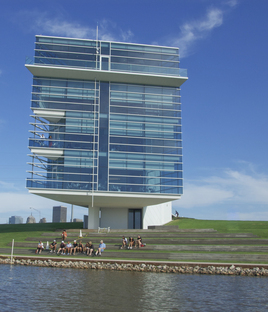 USA Canoe/Kayak has announced that the Oklahoma River will be the site for the 2012 U.S. Olympic Trials for Flatwater Sprint, April 20-21. Two-time Olympian,Carrie Johnson (San Diego, Calif.) and 2011 Pan Am Games Bronze Medalist, Ryan Dolan (Kailua, Hawaii) can each earn a berth to the Olympic Games in London with victories in the Women’s Singles Kayak 500-meter event and the Men’s Single Kayak 200-meter event, respectively. USA Canoe/Kayak will also hold its National Team Trials for the 2012 ICF World Cup and ICF ParaCanoe World Championships during the event. The sport of ParaCanoe has been recently selected to debut at the 2016 Paralympics.

“The Oklahoma River is an ideal location for us to host these events as we select our top athletes for 2012 and identify talent as we look toward 2016,” said USA Canoe/Kayak Executive Director Joe Jacobi. “We’re also excited to offer metro area youth the opportunity to actually kayak with some of these top athletes in the nation as part of the event.”

On Saturday, OKC RIVERSPORT will host a free Paddle Now! youth event for kids ages 8 to 16. Youth will have the opportunity to get into a sprint kayak with a top U.S. athlete and go for a short paddle on the Oklahoma River.

“It’s truly a once in a lifetime opportunity,” Jacobi said. “I know a lot of moms and dads will be wishing they had the chance to experience the sport like this. The real beauty is that the kids don’t have to have any previous kayaking experience to do it. The athletes will make sure they have a great time.”

The competition and Paddle Now! youth event will be free and open to the public.

During the 200m event, the first of three state-of-the-art starting systems to be funded via MAPS 3 will be unveiled. These starting gates will be identical to the ones used at the 2012 Olympic Games in London. The pneumatic gates hold the boats in place and then drop with the starter’s gun, ensuring a fair start and a higher standard of racing. The gates are manufactured in Hungary and will be another key benefit to the Oklahoma River venue making it the only place in the country where athletes can train with the system they will encounter in international competition.

“As home to the OKC National High Performance Center for both rowing and canoe/kayak, it will be exciting for us to watch the athletes who live and train in OKC race here to qualify for Team USA,” said OKC Boathouse Foundation Executive Director Mike Knopp. “Over the past two years, these athletes have really become a part of Oklahoma City, so we want to give everyone the chance to come down to the river and cheer them on as they race for a shot at their Olympic dreams.”