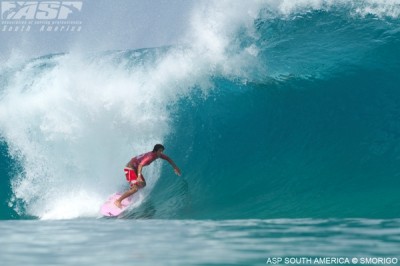 With consistent surfing throughout the event, Miguel Pupo (BRA), won the 26th annual ASP PRIME Hang Loose Pro Contest 2012 at Cacimba do Padre Beach, in Fernando de Noronha island, Pernambuco, Brazil. In an all-Brazilian Final, Pupo defeated Jean da Silva and took home the U$40,000 and 6,500 points to put him at the top of the ASP World Ranking 2012.

“To win a contest in Brazil is something that I really wanted to accomplish,” said Pupo. “I’ve won two PRIME events in the US last year (Trestles and Santa Cruz), but I really wanted to show that I could win at home as well, especially here in Fernando de Noronha, which has incredible tubes. I’m stoked to have won the Final against Jean (da Silva). He beat my friend (Gabriel) Medina yesterday (Friday) who got really upset. Medina’s mom told me I had to win the contest now to make up for it, so I’m even prouder.”

Pupo set the record for the highest-heat total of the event by scoring a 19.77 out of a possible 20 points, which included a perfect 10-point ride from the five judges on an incredible tube-ride during the Semi-finals against Ricardo dos Santos.

“That wave was so perfect,” continued Pupo. “I stalled as long as I could during the drop and then I just enjoyed the ride inside the barrel and ended up with a perfect score. After I came out of the tube, I was so relaxed that I just decided to throw an air at the end to guarantee a 10.”

Jean da Silva, who was set on becoming an unprecedented 2-time event winner at the Hang Loose Pro Contest (winner in 2006) could not repeat his feat and finished as the Runner-Up scoring an 8.77 and a 7.33 on his two best waves.

“I got close to winning it, but that heat was a little bit complicated because there weren’t many waves,” said Jean da Silva. “But Miguel (Pupo) ripped, he got two great scoring waves and I only had one. I did my best and congratulations to Miguel who deserved the victory. I’m happy with 2nd place, it’s a good start to the season and now I’ll try to maintain consistency during the next events in Australia.”

Ricardo dos Santos (BRA) was on a rampage throughout the entire event but didn’t make it past the Semi-finals. His views on competition differ from the rest of the athletes in that he only wishes to compete in events with quality and preferably, tubular waves like the ones in Fernando de Noronha.

“The contest was excellent and I think I caught the best waves I’ve ever surfed in Noronha,” said Ricardo dos Santos. “I can only be thankful for the great waves and barrel after barrel this week. But getting through a heat is a matter of luck sometimes. I’m sure that if I had gotten out of one of those tubes, I would’ve been in the Final, but this time Miguel got the best waves, so he deserved it.”

Also posting a good result in the event was Brian Toth, from Puerto Rico, who ended up in 4th place overall in the ASP World Rankings with his Semi-final finish.

“It was a great start to the year,” said Brian Toth. “I arrived here without much expectation and I made it to the Semis, which is my best result here in Noronha. So I’m going to party a lot tonight and drink some ‘caipirinhas’ because there are no heats tomorrow”.