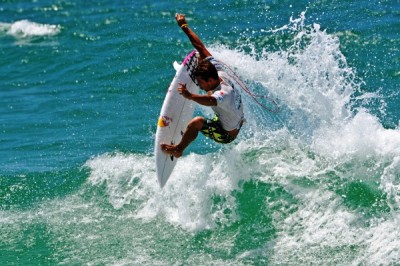 “It’s been an incredible event and I was so looking forward to surfing against any of these guys and we all met in the final which was perfect.”

“We enter the event to get ready for the upcoming Quiksilver Pro which begins the World Title season and through every heat here I’ve increased my performances, dusted away the cobwebs and feel good right now about winning.”

Wilson’s aerial skills were decisive in the final after Mick Fanning jumped to a big early lead when he scored an 8.77 in the opening minute.

Wilson patiently waited for decent waves and called on his aerial reverse moves to nail the big scores – Mid way through the final Wilson matched Fanning’s 8.77 and then late in the final secured the win with a back up 7.77 on his final ride.

Not surprisingly Josh Kerr proved to be Wilson’s greatest challenge after he nailed a massive aerial move to post the highest wave score of the final of 9.23 but he was unable to find a decent enough back up score to overtake Wilson.

“Second is good but it’s also disappointing, particularly when you get the best wave score in the final but I’m good, it’s great preparation and it has been a super fun event with big crowds and good waves.”

The Burleigh Headland was packed with spectators who enjoyed the dominance of Queensland’s four best surfers in this event and the scenes reminded many of the jam packed Stubbies crowd from events back in the 70’s!

Wilson now heads to Sydney for this week’s Australian Open of Surfing (ASP 6-Star Men’s World Tour) before returning to the Gold Coast for the Quiksilver Pro which marks the beginning of the ASP World Title Series events for 2012.

Last year Wilson, 23 years of age, was the ASP World Title Tour’s Rookie of the year finishing in 9th place overall and today’s win sets the scene for his 2012 assault on the World Title.

Taj Burrow (who didn’t compete this year) won this event in 2010/2011 and then went on to win and place 2nd in the Quiksilver Pro so the event’s history as an ideal warm-up is solid.