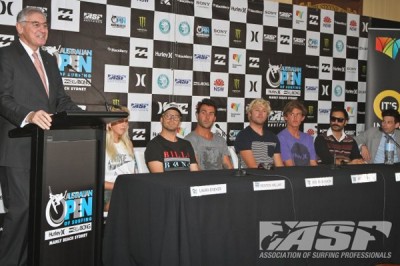 After the phenomenal success of the US Open Of Surfing over the last few years Hurley and Billabong have teamed up to bring a similar event down under. The Australian Open of Surfing presented by Hurley and Billabong at Manly Beach is set to be one of the biggest events on the Australian surfing calendar, featuring an ASP 6-Star Men’s World Tour event, an ASP 6-Star Women’s World Tour event and Men’s and Women’s ASP Australasia Pro Junior Series events.

After being absent from the international scene for a number of years the Australian Open Of Surfing will see competitive surfing return to Manly with style and flair. Manly hosted the world surfing titles in 1964 and since then has hosted an array of world-class surfing competitions, but it’s been a few years since an international event has been held at Manly and the Australian Open Of Surfing is sure to make an exciting return to one of Australia’s most famous beaches.

Australian Open Of Surfing is set to feature the best surfers in the world with 13 of the top 34 set to surf in the event alongside a multitude of current and future surfing stars.

Joel Parkinson (AUS), who finished runner-up in the 2011 ASP World Title Race is looking forward to starting his 2012 competitive season at the Australian Open Of Surfing at Manly Beach.

“I’m really looking forward to this event,” Parkinson said. “I haven’t actually competed in a proper ASP World Tour event in Sydney. The last time I competed at Manly I was still in the juniors there was nothing of this size and scale. It will be an interesting week with so much going on and I’m excited to to check it out, I can’t wait for it.”

Adrian Buchan (AUS) is about to start his 7th season competing on the elite ASP World Title Series and will be looking to start the year with a solid result at the Australian Open Of Surfing as it’s one of the few events in his home state of New South Wales.

“We come home from a long year on the road and spend time trying to decompress,” Buchan said. “Now this is where you have to pull it together, dust off the cobwebs and get stuck back into it. It’s really exciting to be able to start the tour in Australia. You know, I spend the first few months of the year watching the tennis and the cricket on the tele, kind of waiting for ‘our’ turn. Now it is our turn and it’s great to be down here at Manly.”

Laura Enever (AUS) is about to enter her second year as a full time competitor on the ASP Women’s World Tour and will be using every ounce of her home town knowledge to help her finish the inaugural Australian Open Of Surfing on a high.

“The last event we had was the US Open at Huntington so we’ve had a huge break,” Enever said. “I know all the girls will be ready, we’ve had months to prepare. Living close by is an advantage, it’s the perfect way to start the year. Being down in Manly is such a good vibe, there’s been some special moments for women’s surfing over the years here and it’s cool now that I get to come down and be a part of it. It should be an amazing week.”

The Honourable George Souris, MP – Minister for Tourism & Major Events was excited to be at the official press launch for this historic event.

“The NSW Government through Destination NSW is proud to be a foundation partner in this brand new global event for Sydney and NSW, The Australian Open of Surfing,” Minister Souris said. “This event brings the best of surf, skate and music to our city, embracing youth culture and promoting the unique energy of Sydney’s outdoor lifestyle. Locals, interstate and international visitors are going to be able to experience an event like never before, including nine days of free entertainment featuring the world’s best surfers, skaters and live music.”

The Hon. Michael Baird, MP – Member for Manly & NSW Treasurer is proud to bring such a new and innovative event to his backyard, Manly.

“We are delighted Manly was chosen as the Sydney home of this new major event,” Minister Baird said. “It will re-affirm Manly’s position on the global surfing circuit. As the Member for Manly I can confirm Manly has the best of Sydney’s beach culture and Sydney Harbour, and a vibrant food and wine scene. I’m looking forward to a week of action and the imminent arrival of one of the biggest weekends Manly has seen in a long time with DJs and bands such as The Living End and Sneaky Sound System performing.”

The Australian Open Of Surfing at Manly Beach will also feature skating competitions and demos, music concerts, athlete signing sessions and much more. The event is free for the public to view in person and live on the internet via australianopenofsurfing.com