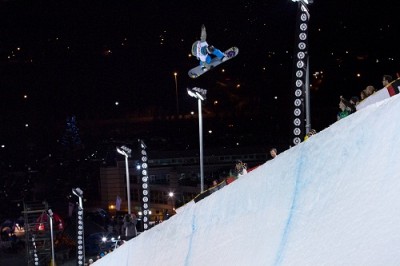 The 5Star Burton Canadian Open in Calgary, Alberta wrapped up today with slopestyle finals going down under sunny skies at the Canada Olympic Park.  American slopestyle specialists, Chas Guldemond (USA) and Jamie Anderson (USA), took the wins making Jamie the new leader of the TTR Slopestyle Tour Rankings.  This is Chas’ first slopestyle result registered for the 2011/2012 season.  The halfpipe finals went off last night where Ryo Aono (JPN) and Queralt Castellet (ESP) were victorious.  Ryo is now on top of the men’s TTR Halfpipe Tour Rankings and Queralt is in the lead for the women.

The slopestyle finals kicked off just before noon and featured a great course with three jibs at the top, three kickers and ended with a multi-option rail setup in the finish area.  Chas Guldemond set the bar high from the start and was able to maintain his lead all day long.  Chas’ best run of the day was made up of a frontside lipslide, backside 180 to 360 out and a half Cab 180 to backside 180 out on the jibs, a switch backside 900, backside double cork 1080 and a backside rodeo 900 on the jumps and finished with a Cab 270 backside lipslide to frontside boardslide on the last jib setup.  Up and comer, Justin Morgan (USA), took second place finishing just 2.3 points behind Chas and Brandon Reis ended up in third for an all-American podium for the men.

On the women’s side, Jamie Anderson dominated the course with her signature flowing style and took the win with a boardslide, tailslide 270 out and tailslide to fakie on the jibs, a switch frontside 540, backside 540 and switch backside 540 on the jumps and finished up with a tail grab to backside 50-50 to backside 180 out.  Swiss rider, Sina Candrian, took second place and Stefi Luxton grabbed her first major podium spot in third place.

The halfpipe finals went off last night under the lights and Ryo Aono and Queralt Castellet had the best runs of the evening.  Ryo took over the top spot in the TTR Halfpipe Tour Rankings after taking the Canadian Open Halfpipe title. He won with a run that consisted of a Cab 1080, frontside 540, backside 900, frontside 1080 and ended with a Cab 720.  Queralt took the lead in the Halfpipe Tour Rankings for the women with her victory.  This was her first major TTR win of her career and had a great showing with a run that included a frontside 900, backside 540, frontside 540, backside air and a frontside 1080.