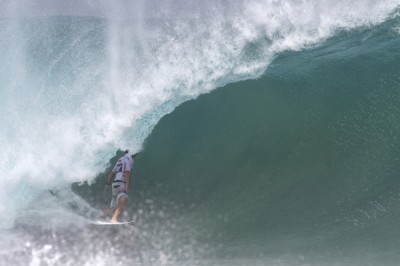 Cacimba do Padre beach on the islands of Fernando de Noronha located 545 kilometers off the coast of Brazil is home to the ASP Prime Hang Loose Pro Contest. After a full week of poor conditions, sunny skies and a swell in the 4-6 foot range (1.5-2 meters) welcomed 96 of the world’s top surfers for the first ASP PRIME event of 2012.

Ricardo dos Santos (BRA), had the day’s highest heat-total with a 17.33 out of a possible 20 points in Heat 4 of Round 1. Santos scored a 9.33 on his highest scoring barrel during the first day of competition.

“There are great waves, but I got really lucky,” said Santos. “I spent the last three months getting barreled in Hawaii, so I’ve got a good idea of what to do, but I got lucky because everyone else in the water can do the same thing. I just think my positioning was what made the difference and being in the right place at the right time.”

“I’m stoked to have won that heat,” said Quinn. “Everything worked out, I found some good waves and I hope to keep doing well.”

The two top seeds of the event also qualified into the next round, both coming in 2nd place in their respective heats. The number 1 seed, Gabriel Medina (BRA) caught a tube ride followed by a frontside air to defeat Tim Reyes (USA) and Caia de Souza (BRA) in their heat won by Jeronimo Vargas (BRA).

“Conditions got really tough in my heat and I just tried to stay close to the point, where I thought the waves were better,” said Medina. “I’d like to catch some better waves in the event because my objective here is to win the contest.”

Damien Hobgood (USA), who arrived as the number 2 seed in the event also qualified behind Bernardo Miranda (BRA) in their heat over Gony Zubizarreta (SPA) and Alex Ribeiro (BRA).

“I rather by lucky than good,” said Hobgood. “That wave was great and that tube just opened up cleanly. The conditions were good in the beginning but a strong current changed things and I couldn’t catch anything else after that.”

Stu Kennedy (AUS) was another international surfer who guaranteed his spot into the next round.

“I spent a lot of money to get here,” said Kennedy. “The trip was really long, so I couldn’t afford to lose. I wasn’t too confident on my backhand and felt more at ease on the rights. It’s my first time to Noronha and I’m just stoked to make my heat in such a beautiful place.”

The Hang Loose Pro Contest is an ASP South America sanctioned event and is the introductory ASP World Prime event of 2012, sponsored by Hang Loose and in partnership with the State of Pernambuco through EMPETUR, the Secretary of Tourism, the Administration of Fernando de Noronha, Projeto TAMAR and co-sponsored by Overboard, Bleat, Hot Water, Central Surf, Sthill, WQSurf, Tent Beach, Star Surf, Supertubes, K&K, Cut Wave and Red Beach. The event comes with the support of the Pernambuco Surf Federation, the Northeastern Surf Association, Fluir Magazine and Waves Website.

The event is transmitted live at: http://www.hangloose.com.br/procontest2012/default.asp