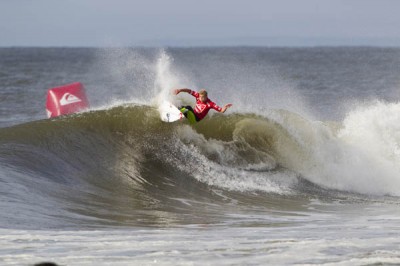 A fit, well rested and relaxed Mick Fanning is poised to strike at the Quiksilver Pro presented by Land Rover starting on the Gold Coast on 25th February.

The two-time World Champion missed the season-ending Pipe Masters in 2011 because of a neck injury and burnout, but after an extended period away from the surf can’t wait for the World Tour’s opening event in his backyard at Snapper Rocks.

The man known as “White Lightning” showed his extended break was just the tonic dusting off any rust with the day’s highest score of 9.5 while competing for Kirra Surfriders Club during a recent boardriders event on the Gold Coast. A stellar field also included newly-crowned Pipe Masters champion Kieren Perrow, Joel Parkinson, Owen Wright, Adam Melling and Mark Occhilupo.

“I needed to take some time off and relieve some pressure on the neck,” Fanning said. “It was definitely a break I needed. I was feeling pretty stale and pretty close to burnout towards the end of the year.

“But everything has been good, I had a few weeks off and didn’t really surf all that much.”

After growing up on the famous righthand point break at Snapper Rocks, Fanning said familiarity with the local conditions was a big advantage and there was always a thrill with the first event of the year.

“Every time you paddle out it is a new heat, but being home advantage we know the wave so well and have surfed here so much over the years it’s definitely a confidence booster and especially sleeping in your own bed.

“I guess you try and take that confidence from all the time you have surfed here and put that into a heat.

“Been at home it’s pretty cool watching everyone trickle in. One day you’ll see one guy and think, ‘cool, the contest is only a few days away’. I love to see how everyone is surfing.

“On that first day of the event, everyone has done their pre-season, done all their work on boards and fitness and it’s great to see how everyone turns up in that first round. It’s really exciting with the buzz going around.”

Fanning was unsure of what 11-time World Champion Kelly Slater had planned for 2012 and if he would go for an incredible 12th title.

“He (Kelly) has his faults and he is beatable, but a lot of the time he gets off to great starts,” Fanning said. “He’s just like anyone else and you have to concentrate on your own game and just know you have done the work needed and hopefully it all comes together at the right time.”