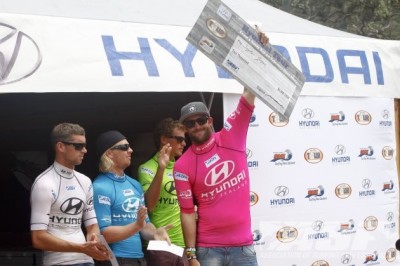 2011 ASP World Champion Taylor Jensen (USA) showed why he is the best in the business with a near perfect performance in the final of the ASP Open Men’s Division of the Hyundai Tour event at Sandy Bay, Whangarei, New Zealand.

Jensen’s opening ride was a near flawless 9.0 (out of a possible 10) and the smooth natural footer linked a long hang ten nose ride with a number of fin-waft re-entries to take the lead in the heat held in 1 – 1.5 meter waves.

Jensen’s second top scoring ride saw him complete a similar display of fins free re-entries and nose rides to combine for a final heat score of 17.35 (out of a possible 20).

This was Jensen’s second victory at Sandy Bay and he was obviously stoked on his win.

Hot on Jensen’s heels was young Australian star Mitch Surman (Australia) who locked in a 16.50 point heat score, needing only an 8.86 score to move into the lead.

Surman’s highest scoring ride had the crowd on their feet and the Australian camp was screaming in support. Unfortunately the ocean went quiet in the dying minutes of the final and Surman was left to take second place behind close friend Jensen. Both surfers were surfing for valuable ASP Australasia Longboard Qualifying Series (LQS) points, which will ultimately see them qualify for the ASP World Longboard Tour.

The sole Kiwi in the Open Men’s final was Thomas Kibblewhite (Orewa) who despite surfing his best heat in the event, couldn’t match the scores of Surman and Jensen. Kibblewhite put on a powerful display and solidified his placing at the top of the 2012 domestic Hyundai Tour ratings after three of five events.