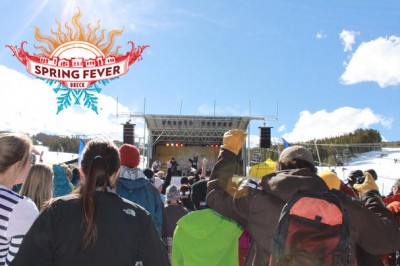 Breckenridge, CO—Breckenridge Ski Resort announced today the schedule of events planned for this year’s Breck “Spring Fever” month-long festival, which will feature a series of events taking place from March 17 to closing day, April 15, 2012, both on the mountain and in town.

Spring Fever, presented by Cadillac, will take place throughout Breck as the town and mountain welcome visitors to one of the best times of the year for skiing and riding. Spring in Breck is widely known for having the best snow in Colorado, along with sunny bluebird days, special events, and great deals for guests from around the world. There’s no better way to send off the season than with Breck’s Spring Fever festival.

“We’re very excited to announce this year’s lineup of Spring Fever festivities,” said Kieran Cain, Breck’s director of marketing. “Last year’s inaugural season of the festival set the bar high for providing the best spring party in the Rocky Mountains for our guests, and we’re looking forward to taking our month-long celebration to an entirely new level this year to coincide with this historic Breck 50th Anniversary Season.”

Breckenridge Ski Resort launched Spring Fever last year to celebrate and embrace the biological change which occurs in humans as the seasons switch from winter to spring. Wikipedia defines spring fever as: “A term applied to several sets of physical and psychological symptoms associated with the arrival of spring, and an increase in energy and vitality.”

The Bud Light Live Concert Series brings the party to Breck with 6 total days of big-name acts on Saturday and Sunday afternoons on a specially-constructed stage at the base of Peak 8. 2012 music lineup with be announced soon; last year’s acts included Ozomatli, The Wailers, moe., DeVotchKa and the Flobots.

Spring Fever 2012 Signature Events will include:

*Schedule of events is subject to change

Events continued to be added in town and on the mountain throughout Spring Fever; for the full schedule of Spring Fever events, visit www.BreckSpringFever.com.

Breck Spring Fever is presented by Cadillac. The weekend concert series is presented by Bud Light, and associate partners for the event are Helly Hansen, Sobe LifeWater and Maui Jim.

Breck Spring Fever’s official lodging partners are The Doubletree by Hilton Breckenridge and The Village at Breckenridge. Save your spot in the midst of all the Spring Fever action with this official Spring Fever lodging offer of only $119 a night!  Both properties provide easy access to 31 lifts serving over 150 trails and are both steps away from Historic Breckenridge Main Street. Book your Spring Fever trip today atwww.BreckSpringFever.com!