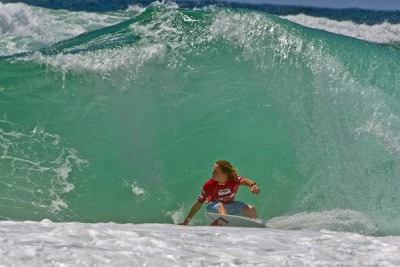 It was a similar story for ratings leader Chapman, who was seeded into the highest round (64-surfers), with the highly touted North Narrabeen surfer posting a combined two wave heat total of 9.60 (out of a possible 20), finishing in second place behind Portugal’s Vasco Ribeiro (12.50), only just edging out Frenchman William Aliotti (8.35) and Australia’s Tom Hatcher (5.30) who finished third and fourth respectively.

Meanwhile, outside of competition, Oakley in conjunction with North Stradbroke Island Surf School held a learn-to-surf day for a handful of Indigenous children who travelled all the way from Mt. Isa in Queensland’s north-west.

Oakley identities including the likes of former ASP World Tour surfers Tom Whitiker and Beau Emerton joined Kai Hing, Keahla Naihe and North Stradbroke’s own top international surfer Lincoln Taylor shared the thrill of surfing with the super-stoked kids, many of whom had never seen the ocean before.

Running from February 1-5 and held in the varying breaks surrounding the island paradise, the Oakley Pro Junior is the third stop on the prestigious ASP Australasia Pro Junior Men’s tour.