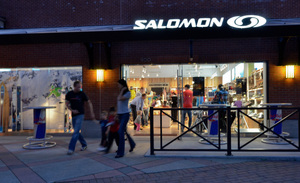 Salomon USA and its parent company, Amer Sports Winter and Outdoor Americas, (ASWO) are pleased to announce the opening of Salomon’s first Flagship store in the United States.  The Salomon store will be located in Salt Lake City’s City Creek  Shopping Center.

The store is set to open in late March of 2012 and will carry Salomon apparel, footwear and other softgoods items found on the Salomon website. While Salomon hardgoods will not be available for sale at the City Creek location, consumers will be referred to the authorized Salomon dealers around the state of Utah. This will allow consumers the benefits of world-class boot fitters and being custom fit for their alpine, Nordic and snowboard needs.

The store will be outfitted with Salomon’s latest generation fixtures as part of a global Salomon fixture launch featuring digital technology and tactile displays.

“Opening our first Salomon flagship store in the USA is a key step forward in offering our consumers a more rounded brand experience,” says Tim Wakaruk, Director of Retail Operations for ASWO.  “Our directional goal is to work collaboratively with our current retail, wholesale and online partners as well as our own ecommerce strategy. This holistic approach will allow all of us the grow markets and ultimately, the overall industry.”

“It’s been great to work with our retail partners to elevate the Salomon brand in the US,” says ASWO President and General Manager Mike Dowse. “And we’re excited to offer shoppers another way to choose our stellar products in downtown Salt Lake City.”

In coming months Salomon will announce the date of an opening celebration for the Salt Lake City flagship store. The event will be open to the public and will include a tour, special gifts and drawings, athlete appearances and more. While there are plans to open additional brand and partner stores in the United States, those dates or locations have not yet been solidified.