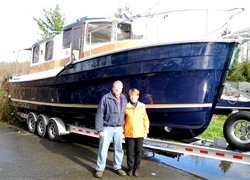 Ranger Tugs is pleased to announce the delivery of the 100th Ranger Tug 29 to her new owners. The 100th boat was sold by Marc Grove, owner of Wefings Marine, the Apalachicola, Florida-based Ranger Tugs dealer. Marc was also responsible for the sale of the first R29 in 2009 which was also Wefings Marine’s 100th anniversary year.

The R29 was introduced in 2009 and has remained a popular model of the trailerable trawlers since her debut. Marc sold the 100th hull at the 2011 Ft. Lauderdale Boat Show to new owners, Ruth and Wally Naset, who will take delivery in Sumerland Key, FL and plan to cruise their home waters in the Florida Keys and beyond.

Wefings Marine has been a Ranger Tugs dealer since 2006 and Marc Grove shares, “We love having the Ranger Tugs as part of our line-up. The boats are the perfect size for gunkholing around the Intracoastal waterways but their layout and features allow owners to take them offshore or to more inland waters if they prefer. The “trailerable trawler” is an increasingly popular class of boat as people downsize and look for comfortable and economical alternatives to larger and less efficient boats.” Marc visited the Monroe, Washington, production facility of Ranger Tugs to be on site as the 100th R29 came off the production line.

“It’s a rewarding experience to be a part of selling and delivering hull numbers one and 100 of the R29. Over the years the entire lineup has been through various improvements and changes that make them as comfortable, fuel-efficient and maneuverable as possible,” comments Grove.

Wefings Marine has also committed to purchasing the first R31 and will have boats available at the Miami, Jacksonville and Baypoint Boat Shows this year.