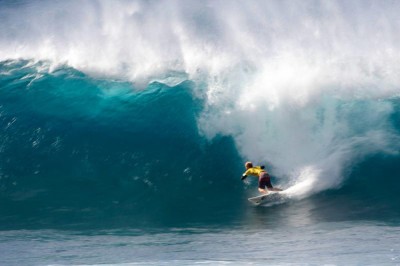 Hawaii’s John John Florence created one of professional surfing’s most dramatic moments today to claim his second consecutive Volcom Pipe Pro title, completely flipping the table on former Pipe Pro champion Jamie O’Brien (Hawaii) in the final seconds. O’Brien had held the lead for 34 minutes and 45 seconds of the 35-minute final… and then it evaporated before his eyes.

O’Brien had bolted away at the start of the heat with an apparently insurmountable lead and Florence wasn’t even in the picture. O’Brien’s top two scoring waves were near-perfect: 9.0 and 9.43 with all three of his challengers requiring a combination of high scores to beat him. Maui’s Kai Barger had posed the biggest challenge with a 9.33, but a second wave eluded him. San Clemente’s Nate Yeomans was a distant third with 7.57 points total. Florence’s score line wasn’t much better: 9.93 total.

Then at the five minute mark, two waves in the 8-10 foot range pushed through. Florence got the first: an unbelievable backside tube at Pipe that was deep, critical, and near-impossible. He blasted out with the spray and scored a perfect 10.

Right behind him, O’Brien swung, pulled in deep and blew out in front of Florence’s face for a 9.93 – further extending his lead.

One minute to go… Florence paddled over and congratulated O’Brien. Then a dark line on the horizon caught his eye. One last wave stacked up on the Pipeline reef. Fifteen seconds to go… Florence clawed his way past a frantic O’Brien who could see the writing on the wall of the wave. Florence clawed his way past Jamie, over the ledge, under the lip and into the heat-winning tube ride – a 9.93 – to claim the $20,000 first prize.

Less than eight weeks ago, Florence lost in similar fashion here to 11X world champion Kelly Slater during the Pipe Masters. Today’s victory seemed to realign the trajectory of the 19-year-old, who appears at this moment in time to be destined for one of pro surfing’s greatest careers of all-time.

“I wrote myself off half way through,” said Florence. “Kai and Jamie both had nines. I can’t believe it. Here at Pipe anything can happen.

“With 40 seconds to go I wasn’t even thinking about it. I was like, yeah Jamie, congratulations, I won last year and I’m stoked for you. Then I turned around and there’s a peak. I didn’t even know if he was going. I was going to go left and backdoor the peak, then I ended up having to fade, go right, and barely got under it. It was a wild ride.

“Last year this gave me so much confidence going into the year. This is the first contest of the year and I’ve got confidence again. So much has gone down in the last year, qualifying for the tour, changing my whole way of surfing and trying to get into the contest thing. I’m so happy right now.”

Back on the beach, O’Brien and Florence shook hands and O’Brien shook his head.

“Man, I feel like you just threw me out of the car before we got home,” said O’Brien. “I’m going to come and steal that trophy from you in the middle of the night,” he laughed.

Nine years John John’s senior, O’Brien has long been the man to beat at Pipe, having won at Pipe Masters, Backdoor Shootout, and multiple Volcom Pipe Pros. But Florence is quickly leveling the scores.

“It hurts,” said Jamie, holding onto the runner-up $10,000 check. “You think you’re going to win and you don’t. It’s OK. I got some really good scores and I felt I put on a great performance. To me that means everything. I had a great time. I finally got in a good rhythm my last couple of heats. I enjoyed myself and it was a good day.”

O’Brien appeared to toy with Pipeline today, switching up Backdoor and Pipe with regular foot and goofy foot barrels. But while he might have made it look easier than it was for everyone else, he was quick to admit things aren’t always as they may appear – hence the credo that Pipeline is for warriors.

“It might look easy, but some of the stuff that happens to you underwater while you’re getting pounded is really intense and scary. Getting caught inside out there, drags you and drags you, you’ve got to climb up your leash – it’s a lot of work out there.”

Third place in the final was Barger. Fourth was Yeomans.

Worthy mentions include top Australian finisher Mitch Coleborn, and former Pipe champion Bruce Irons, who showed a fantastic return to form this week and lost out in the semi’s.

From today’s results, the following surfers have won a spot in the first round of next December’s Pipe Masters: O’Brien, Barger, Billy Kemper (Maui), Flynn Novak (Oahu), Fred Patacchia (Oahu), Kalani Chapman, and Bruce Irons. Florence is an automatic starter at the Pipe Masters as he is on the elite ASP World Tour.

Next up for Volcom is their Volcom Fiji Pro, June 3-15 – the fourth of 11 events that comprise the ASP World Tour.

A full two-hour highlight program of this week’s Volcom Pipe Pro will air on Fuel TV this Saturday at 7:30 PM ET/4:30 PM PT. For more information, check your local listings or go to www.fuel.tv.