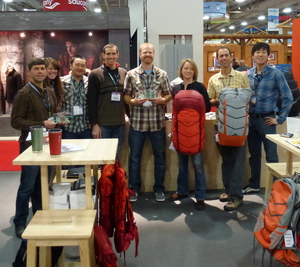 On January 19, at the annual Outdoor Retailer Winter Market in Salt Lake City, Backpacker magazine awarded Boreas two 2012 Editors’ Choice Awards for the Lost Coast 60 and the Buttermilks 55 backpacks. Given annually, Backpacker magazine’s Editors’ Choice Award, the most prestigious award in the outdoor industry, recognizes gear for its outstanding innovation in design, materials, and performance.

These two award winners represent the simple design genius and true uniqueness of Boreas. The company is the brain child of San Francisco based design collective, lowercase Designs. The desire to have high functionality and clean design is gracefully translated by them within Boreas bags. Both the Buttermilks 55 and the Lost Coast 60 highlight Boreas’s progressive design and minimalist aesthetic through hidden daisy chains, tool loops, and a ribcage design that strengthens the integrity of the backpacks.  “This recognition from Backpacker is a great honor and achievement for the Boreas Team and our design vision,” says Boreas and lowercase co-founder and developer Tom Newth.  “We want to make great gear that isn’t overly complicated and should be simple yet innovative in both form and function. Our first product offering of packs has been successful and we can’t wait to introduce our future gear.”

Backpacker Editor-in-Chief Jonathan Dorn said about the award, “no other magazine or website conducts in depth field-testing as vigorously or impartially as the crew led by Gear Editor Kristin Hostetter” (with pack). All winners must excel under extensive field-testing conducted by Backpacker’s team, who take hundreds of new products into the backcountry every year.

The complete list of Backpacker 2012 Editors’ Choice Award winners will be officially announced in the magazine’s April Gear Guide issue, on newsstands March 6, 2012.