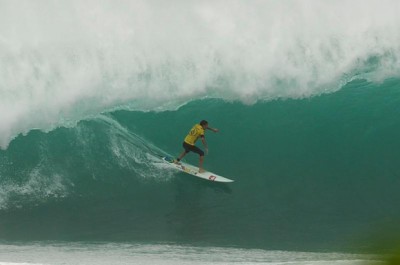 He came to Hawaii looking to fulfill a childhood dream and humbly gain experience at the world’s most revered and feared surf spot: the Banzai Pipeline. But 20-year-old New York pro surfing rookie Balaram Stack scored one of surfing’s rarest waves: a perfect 10 on a fearsome day deemed only for warriors at the Volcom Pipe Pro. Fifteen-to-20 foot Pipe doled out its fair share of injuries, snapped surfboard and bruised pride today. No-one imagined that the kid from New York would steal the show, unscathed.

Stack was up against one of Pipeline’s most respected riders today – Kalani Chapman, 29, and a pair of rising Hawaiian stars in Granger Larson, 21, and Tonino Benson, 22. He had a nail-biting start; skittling to the bottom of his first ride on his stomach, and following up with a short tube-ride that almost knocked him off. But none of his challengers were fairing much better in the rogue lineup and Stack surprisingly took a slim lead.

Then with three minutes to go, a huge A-frame peak pushed through and Balaram, sitting deepest, swung and stroked over the ledge. He dropped weightlessly, set the rail of his surfboard on edge and pulled up into a gaping, hollow barrel, arms outstretched. When he exited in a plume of spray and whitewater, he was standing casually with hands held behind his back… in disbelief.

Stack also scored a bonus $1,000 as part of the ELECTRIC Perfect Ten bonus awards. He is now among the final 32 surfers left in the event and will next face defending event champion John John Florence (Hawaii). The Volcom Pipe Pro is expected to wrap up and crown a champion tomorrow.

“It’s what I’ve always wanted – to have a heat out there in pumping waves,” said Stack. “I just thought that if the wave came, I was going, if not, I’ll regret it forever. I knew the waves were firing and there were only three other guys out. That never happens, so I was just hoping I would get a wave. The stars aligned. I got one.

“It was pretty nerve-wracking just being out there. All I was hoping was to make another heat and make it to the next round, but now I don’t even care if I make the next round, that was the best thing ever.

“It’s the first time I’ve ever surfed a contest out here and it’s definitely a dream I’ve had for a while.”

On taking the heat from Kalani Chapman with a perfect 10: “Yeah, that definitely wasn’t supposed to happen.”

Late in the afternoon, Puerto Rico’s Dylan Graves and Maui’s Dusty Payne also found perfect 10′s and, like Balaram, scored a bonus $1,000 each.

Maui’s Ian Walsh called today “one of the best days of the year”. The swell pulsed relentlessly and the lineup broiled with huge tubes, massive peaks, and more than the occasional unrideable steamroller of whitewater.

Walsh put the Pipeline experience into perspective: “You’re not really surfing against the other guys like you are in most of the events around the world. It’s more of a battle between yourself and Pipeline. When you’re out there you feel all the shock waves coming through the lineup.”

California’s Alex Gray surfed the very first heat of the day and overcame a hobbling injury he sustained while surfing gigantic waves on the North Shore’s outer reefs yesterday. With his calf taped up to protect the stitched wound, Gray threw caution to the wind and charged into some of the heaviest barrels of the day.

“We surfed the outer reefs yesterday and unfortunately I broke a fin off in my leg and was in the hospital at around 7 o’ clock last night,” said Gray. “Nothing too crazy, but really sore this-morning and I was wondering how it was going to be. But we’re here to surf Pipeline and you can’t let a previous day’s wound stop you.

“It’s big today. My last wave backed off on the reef and allowed for a really steep drop. In those moments it feels like the whole ocean is going against you, trying to pull you back up the face and I was just hoping that my fins and my rail were going to stay in the water and I was going to make it to the end of the wave. Pipeline is so heavy and dangerous that you always hope for the best but expect the worst and I was glad I made that wave. This is a contest but the best part about surfing at Pipeline is you’re at one of the world’s best waves so it is possible that you could get the wave of your life.”

San Clemente’s Tanner Gudauskas had a lucky escape and advanced, but not without needing eight staples to his skull. Tanner sustained a massive wipeout on his opening ride that pinned him to the reef, lacerating his arm, back and head. He eventually managed to shake off the nerves and try again, taking some of older brother Dane’s advice onboard.

“Dane always says when you take a wipeout like that you’re one step closer to getting the wave of your life, so that’s how I think about it,” said Tanner. “I’ve been taking nothing but wipeouts lately so hopefully one’s coming around the bend.”

On his wipeout: “Mentally I was thinking I (had the wave), then last thing I thought, ‘I don’t have it’ and I was up and over. But the way I landed I didn’t penetrate. I went up and over the falls and landed square on my back and my head hit as well. I was really shaken up. I got lucky because I got a smaller one that barreled after that and made me feel better inside. Then I thought a little bit less about the wipeout and a little bit more about getting in the barrel.”

Defending Volcom Pipe Pro champion John John Florence (Hawaii), who was crowned champion of the Vans Triple Crown in December, scraped through by the skin of his teeth today in a heat that could well have been a final in its own right. Up against former Pipe champion Bruce Irons, Australian Anthony Walsh, and North Shore local Sean Moody, Florence had his work cut out. It didn’t help that he was also surfing injured after almost separating his finger while surfing a few days ago. Florence made a last minute barrel to steal second place away from Walsh and advance.

“I was pretty nervous, I almost wasn’t going to do my heat,” said Florence. “I have a really bad kink in my neck, and my hand… I kind of sat there the whole heat and luckily got a wave in the end. Anthony Walsh is so gnarly. That was definitely a scarey heat to have.. Moody and Bruce too… There’s a lot of wash-through sets. It’s fun but there’s these crazy double ups that come in.”

Bruce Irons was the day’s highest scorer with 17.47 out of 20. He locked in two solid tube rides to Florence, Walsh and Moody battling for second.

The Australians charged today, but none advanced despite scoring more than a few incredible rides. Josh Kerr, Anthony Walsh and Stephen Walsh put on a great show but the highest scores eluded them.

Organizers will assess the conditions at first light tomorrow morning to determine if there will be an 8am start. Tomorrow could be the final day, possibly crowning a champion at around 3pm.