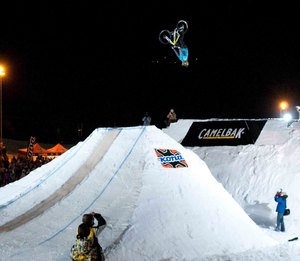 The Teva Best Trick Bike presented by Thule will award $10,000 to the rider who pulls off the most spectacular big-air feat, while the Thule Telemark Big Air presented by Chipotle will divvy up $5000 among the top three skiers ($2500 for first, $1500 for second $1000 for third) based on style and level of difficulty.

Vail-based free-heeler Christopher Ewart is among the 10 pro telemark skiers invited to compete (registration is also open to 20 amateur skiers). Qualifying rounds begin at 11:30 a.m., with the top five amateurs advancing to the evening’s finals, when they compete with the pros. “The fact that it’s under the lights, in front of a huge audience, hitting the same jump as a bunch of guys on bikes, it’s going to be an awesome show,” Ewart recently told Telemark Skier magazine.

Andreas Sjöbeck of Stockholm, Sweden, who is competing on U.S. soil for first time at the Games, says the Winter Teva Mountain Games presented by Eddie Bauer is the event for international telemark freeskiers.

Additional bike events include the Teva Dual Slalom Downhill—an all-out speed descent on Vail Mountain’s Golden Peak with a $5000 cash purse—and the Teva On-Snow Bike Crit presented by Thule, a short-course, multi-lap bike race for $4000 in cash prizes, both of which are open to the public. All registrants receive a legendary athlete bag full of winter gear from event sponsors. Event registration is available at www.tevamountaingames.com.