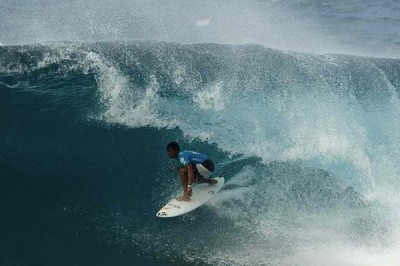 Conditions settled down at the Banzai Pipeline today and yesterday’s death-defying closeouts were replaced by long, hollow tubes at the Volcom Pipe Pro. California’s Chris Ward and Costa Rican Carlos Munoz put on incredible performances at Backdoor that saw them clearly emerge the pacesetters.

A $130,000 5-star Association of Surfing Professionals (ASP) event, the Volcom Pipe Pro still has two days of competition to run before crowning the 2012 champion. The defending champion is John John Florence (Hawaii), who will make his debut on the next day of surfing.

Carlos Munoz, 19, was the only surfer to post a perfect 10-point ride today, earning a bonus $1,000 for the ELECTRIC Pefect 10 award. He did it at Backdoor with an air-drop takeoff into a deep, long barrel that ran the full length of the break. The crowd erupted when he emerged through the curtain of water with fists pumping. His second high wave of 8.6 gave him a total of 18.6 points.

“This is one of my dreams and I’m so stoked to make the 10 and to make my heat as well,” said Munoz. “I felt like the wave was going to be a close-out but I just run, run, run the tube and I can get out. It’s amazing and I can’t believe it. I really don’t have words to explain. Amazing!

“I heard about the $1,000 before but I didn’t know that I was going to win it. I’m trying to get good scores here and then maybe I’ll start traveling to get points for the pro tour.”

Chris Ward, 33, who placed third in the final here last year, logged the highest heat score of the contest so far with a total of 19 points out of a possible 20. Counting a 9.57 and a 9.43 as his best two waves, Ward even had a third ‘throwaway’ wave of 9.0.

“I haven’t really surfed since I injured my knee,” said Ward. “I surfed a couple of heats in China and then stayed off it until today. I guess it paid off because you get hungry and you want to catch good waves. I didn’t want to go on any bad waves and I guess it worked, I lucked out.

“I’ve been coming here to Hawaii since I was 12. Being around the local guys and the legends… learning from the best in good waves… you learn a lot surfing with your favorite surfers. Being out at Pipe when the conditions are good tests your ability. Any heats at Pipe are amazing – just three guys out, so I’m looking forward to more heats.”

Peruvian Gabriel Villaran was the third-highest scorer today, with 17.07 points. He was rock solid on the lefts of Pipeline and is feeling confident of a good-showing this year.

“I made a final here in 2006, so I know what it takes to make it all the way,” said Villaran. “Today’s a great day and hopefully I keep the mojo going through the whole event. When the wave is big, I prefer to go left because I feel more secure. But if the right Backdoor wave comes to me, I’m not going to hesitate.

On the local front, Hawaii’s Torrey Meister was the top scorer of the regular Pipeline chargers with 15.67 points.

“Today it’s a little more manageable so I’m glad they decided to hold off yesterday,” said Meister. “I surf this wave a lot. I like Backdoor a lot and I felt like I could sit a little more wide and pick off a few. It worked. I want to get in the Pipe Masters and this qualifies you for it, and it’s an opportunity to surf Pipeline.”

Organizers will assess the conditions at first light tomorrow to determine if there will be an 8am start. Two more days of competition remain.