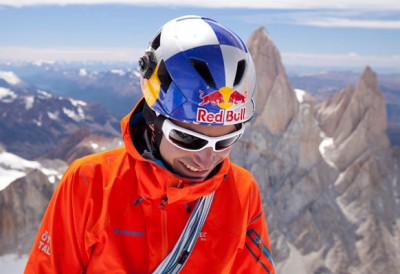 Mammut Proteam athlete David Lama finally succeeded in free-climbing along the legendary Compressor route on the Cerro Torre on 19 January 2012. After three years David has achieved what was long thought to be impossible: He is the first climber to ascend the imposing 3128-meter granite tooth in Patagonia via the south-eastern flank without technical aids!

The Tyrolean professional climber took advantage of a relatively stable break in the weather ? and all-important climber’s luck – to secure himself a place in the record books by free-climbing the Cerro Torre via its south-eastern flank. In achieving this exceptional exploit, David has fulfilled a long-held dream:
“For me, being the first to free-climb Cerro Torre’s south-eastern flank marks the end of what is probably the greatest adventure of my life. I’m really very proud to have been able to reach the peak without having to insert any additional bolts. I’ve learnt so much in the last three years. Climbing among these imposing mountains is simply awesome. I was able to make dreams come true – what could be better?”

The world of alpinism agrees: This success represents a masterful achievement by the Mammut Proteam athlete. Eiger North Wall speed record-holder Dani Arnold greeted David’s feat as a “milestone in alpinism”. Champion climber Stephan Siegrist, who knows Patagonia well, was full of praise: “David’s performance will go down as one of the greatest achievements!”

Cerro Torre – one the world’s most challenging peaks

The granite mountain juts skywards aesthetically on the border between Argentina and Chile; with its steeply towering smooth flanks, it is seen as posing one of the world’s greatest climbing challenges – not helped by the weather in those parts, which can be terrible. Until 1970 it was even dubbed “the impossible peak” in climbing circles. The first climber to conquer it was Cesare Maestri, but his controversial use of a compressor and some 300 bolts is still a hotly debated topic among climbers. The compressor he used still hangs a rope’s length below the peak’s “ice mushrooms” on what is now dubbed the Compressor route.