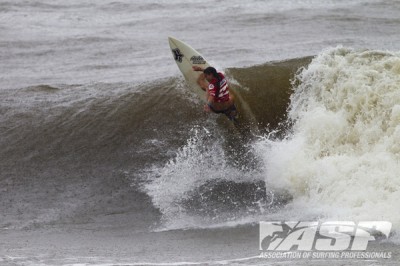 A massive day of competition saw all Quarterfinalists decided in both the men’s and women’s draws at the Billabong World Junior Championships Gold Coast today. Competitors battled the rain, stormy seas and each other in an exciting day of surfing in 2 – 3 foot (1 – 1.5 meter) surf at the world famous Burleigh Heads.

The Women’s ASP World Junior Title race has been whittled down to just 3 contenders after number 3 seed Dimity Stoyle lost her Round 3 clash with Alessa Quizon (HAW). Joanne Defay (FRA), Leila Hurst (HAW) and Philippa Anderson (AUS) are still in the running after winning their heats and advancing to the Quarterfinals today.

“I’m trying so hard not to put pressure on myself,” Hurst said. “Of course there’s a little bit of pressure, everyone’s talking about the World Title, but I’m just trying to have fun.”

Sarah Mason (NZL) once again showed that her backhand attack is capable of posting some big scores at Burleigh Heads. Mason eliminated one of the standout performers of the event Ellie-Jean Coffey (AUS), and will now advance to the Quarterfinals.

“I knew that heat wasn’t going to be easy,” Mason said. “Ellie (Jean Coffey) is a great surfer, so I’m stoked to be into the Quarters. I was behind for a lot of that heat but I try not to think about what anyone else is doing, that helped me stay calm and get the scores needed.”

Nage Melamed (HAW) caused an upset today by eliminating the defending Billabong World Junior Championships event champion, Bianca Buitendag (ZAF). Melamed posted the highest wave score of the women’s event thus far a 9.80 (out of a possible 10), thanks to some high risk turns.

“I knew I needed a big score so I waited for a set,” Melamed said. “I was hoping the wave would be a really good one and it turns out I got a big score so I’m really happy. When I saw that I had Bianca (Buitendag), I knew I had to step up my game. This is my first time at this event so I’m stoked to make it into the Quarterfinals and hopefully I can keep it going and make the Final.”

Sarah Baum (ZAF) was the standout female performer of the day, posting a huge heat total of 16.94 (out of a possible 20). Baum eliminated Maud Le Car (FRA) the number 7 seed in the Billabong World Junior Championships, and will now face Alessa Quizon (HAW) in Quarterfinal 4 when competition resumes.

The Men’s ASP World Junior Title race has also seen a mix up with Connor Coffin (USA) bowing out of the race after losing to Ian Gouveia (BRA). There’s still quite a few scenarios that could play out with only Caio Ibelli (BRA), Garrett Parkes (AUS), Jack Freestone (AUS), Filipe Toledo (BRA) and Ian Gouveia (BRA) still in the running. There is even a couple of scenarios where we could see a tie between 2 surfers, in which case there will be a surf-off – meaning there will be one more heat to decide the 2011 ASP World Junior Champion.

Jack Freestone (AUS) survived a close call, only defeating Japanese surfer Arashi Kato (JPN) by 0.07. Freestone got the nod from the judges for his smooth style and his ability to link manoeuvres together.

“I thought he won, because the scoreboard said he had a 7.27 and an 6.00,” Freestone said. “Then at the last minute it changed so I didn’t know what was going on. But I’ll take the win. It just felt like I was over surfing the wave, it’s pretty slow and fat so I guess I was trying to over do it.”

Medi Veminardi (REU) continued his solid run in this event in his Round 4 heat win against Mateia Hiquily (PYF), the young giant killer. Veminardi will now face Jack Freestone (AUS) in Quarterfinal 1 when competition resumes.

“I don’t really feel like I’m surfing my best,” Veminardi said. “On my first wave I did two turns and lined up the third one, and got a little over excited and fell off. Mateia (Hiquily) is surfing good and he’s got no pressure because he’s young and has a few more years left in this event. So he’s almost more dangerous than some of the older guys because of that.”

Dean Bowen (AUS) survived a nail-biter in the last heat of the day against Soli Bailey (AUS). Both surfers posted a couple of scores in the good range but it was Bowen who edged out in front by less than half a point thanks to his solid backside snaps.

“I only really caught one wave,” Bowen said. “It’s pretty bad out there, like a dog fight. I’ve got a really good board, I just didn’t get the right waves. It’s just good to get the shocker heat out of the way, I just have to keep the roll going and make a few more heats.”

A call will be made at 7:30am tomorrow for a possible 8am start. Every heat of the Billabong World Junior Championships Gold Coast will be webcast live via www.billabongpro.com.