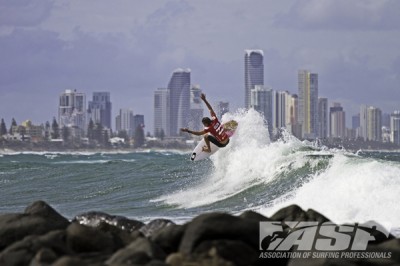 The wind and rain from the last few days has dropped off and contest officials have made the call to run the men’s Round 3 of the Billabong World Junior Championships Gold Coast. The surf is in the 2 – 3 foot (1.5 meter) range, with some fun waves on offer.

“We’re going to get straight into Round 3 of the men’s,” Contest Director Luke Egan said. “Round 4 is on standby, but I’m not sure if we will be running it. We have made the call to introduce jet ski assist, to help the boys get the most opportunity to catch waves. The forecast for the next few days has changed a bit in our favour. The north has been taken out of the winds, and swung around to the east which is onshore, but much better than north.”

The Billabong World Junior Championships Gold Coast will be webcast live via www.billabongpro.com