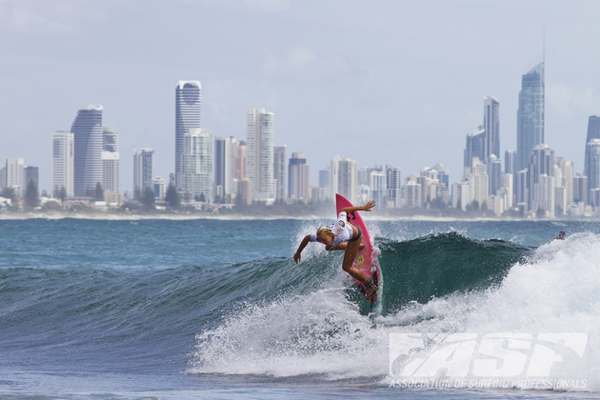 Today saw a slight decrease in swell size at Burleigh Heads for Day 2 of the Billabong World Junior Championships Gold Coast, and the call was made to run Rounds 1 and 2 of the Women’s event. The women went for it in the fun 2 foot (1 meter) surf, putting on a good show for the hundreds of onlookers lining the Burleigh Headland.

Sarah Baum (ZAF) was the talk of the town today after starring in the last heat of Round 1. The young lady from Durban, South Africa used her powerful backhand attack to post the highest heat total of the event thus far – 18.53 (out of a possible 20).

“I surf rights most of the time so I’ve got a strong backhand,” Baum said. “I also think this wave is easy to surf on your backhand because you can get right in the pocket. I was nervous going into this event, but now I’m feeling confident after that 9.93 (out of a possible 10). I was so excited when I paddled into that wave and saw it double up, it allowed me to do a big fins-free turn and that set me up for a great wave.”

Sarah Mason (New Zealand) was another goofy-footer to put on a dominant Round 1 performance where she scored a massive heat total of 17.96 (out of a possible 20).

“It’s awesome surfing at Burleigh with only a couple of girls out!” Mason said. “I live on the Gold Coast, but I haven’t surfed Burleigh in a long time, so it’s good to get some nice waves out here. There was some long waits for waves, so you had to make the most of it when they did come through. I watched Matt Lewis-Hewitt’s heat online yesterday, it was great to see another Kiwi do well, I’m stoked we both got through.”

“I was out there just trying to focus on myself and not worry about the others,” Quizon said. “I live at Makaha on the west side of Oahu and there’s pretty much only rights, so I get to practice on my backhand all the time, so I feel really comfortable out there.”

Ellie-Jean Coffey (AUS) who recently relocated from Crescent Head, NSW to the Gold Coast, put her pointbreak experience to good use today after taking out her Round 1 duel with her younger sister Holly-Sue Coffey (AUS) and current ASP Women’s World Junior ratings leader Joanne Defay (FRA).

“It’s good to surf against my sister, but it’s also nerve racking because if she beat me she’d never let me live it down,” Ellie-Jean Coffey said. “I’m so thankful to Billabong for giving me the wildcard into this event, I’ve got no pressure and nothing to lose, but everything to gain.”

“I feel like I’ve got a bit of pressure on me at the moment, but I’m trying to keep it under control and have fun,” Hurst said. “I’ve had a lot of trouble getting waves out here over the past few days, but after spending some time in the lineup I feel like I know where to sit to get the good ones now, so that helped.”

Dimity Stoyle (AUS) put on a show for the Sunday crowd at Burleigh Heads today, catching 13 waves and posting some scores in the excellent range courtesy of her smooth style.

“I was having so much fun in that heat!” Stoyle said. “It’s only small, but it’s really good. I just caught so many waves because it’s so hard to get waves freesurfing out here. I live on the Sunshine Coast, but feel at home down here on the Gold Coast because I come down a lot to visit my grandparents a lot.”

A call will be made at 7:30am tomorrow for a possible 8am start. The Billabong World Junior Championships Gold Coast will be webcast live via www.billabongpro.com