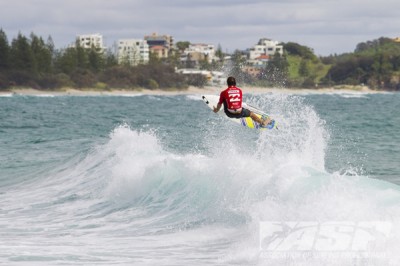 The first man-on-man elimination Round at the Billabong World Junior Championships Gold Coast got under way today in 2 foot (1 meter) runners at Burleigh Heads. The conditions were tricky with good waves on offer, but surfers were forced to be selective and battle for the best waves.

“That heat was hard because it was slow and I was feeling a lot of pressure,” Ibelli said. “But I started to feel comfortable after getting my first good score, I’m so stoked that I made that heat. Sometimes I don’t mind losing in the first round because it makes me angry and fires me up to do well.”

“I was nervous because I had a shocker in my last heat,” Carmichael said. “I’ve had a good start to the year with a win at the Bells Pro Junior and the trials here, so I just want to keep that going. I’m not in the running for the ASP World Junior Title, but I still really want to win this event.”

Tim Macdonald (AUS) earnt his spot in the event thanks to a runner-up finish in the trials, and today eliminated Ryan Callinan (AUS) in a one sided affair. Macdonald surfed sharp and fast to advanced to Round 3, but it was clear that Callinan was holding back.

“It feels really good to be through to Round 3,” Macdonald said. “But I feel bad for Ryan (Callinan), he couldn’t really fight back. You can tell that he’s injured, but we still had fun catching waves with just the two of us out.”

Callinan, the poster boy for the Billabong World Junior Championships Gold Coast was clearly disappointed with his early exit from the event. It’s been a tough couple of months for the young Novocoastrian, Callinan injured right ankle last year and has spent the last few months getting it back to 100%. Then two days ago he injured his other ankle, and went to get scans after his Round 2 loss today.

“It only hurts when I surf,” Callinan said. “It feels fine walking, standing and running, but when I put pressure on my bottom turns it doesn’t feel right. I’m disappointed, but I’ll hopefully be back and ready to go in a couple of weeks.”

Kaito Ohashi (JPN) had the crowd on their feet after landing a massive backside fins-free waft, which netted him an 8.87 (out of a possible 10). This is Ohashi’s fourth appearance at the Billabong World Junior Championships and by advancing to Round 3 he’s already equaled his best result.

“I’m so happy,” Ohashi said. “The waves here are so much fun, much better than at my home. It’s great to be here and have people enjoy my surfing.”

Vasco Ribeiro (PRT) was the standout performer of the day, scoring an near perfect 9.50 (out of a possible 10) on his opening ride. The Portuguese surfer looked at home at Burleigh’s right-handers, using powerful, precise snaps and carves to impress the judges.

“The waves are great so I tried to do my best,” Ribeiro said. “I’ve got a good board and I caught a long wave, everything came together for me. I’m very happy to be here at the Billabong World Junior Championships, everyone surfs so good, so you always have to be at your best.”

A call will be made at 7:30am tomorrow for a possible 8am start. The Billabong World Junior Championships Gold Coast will be webcast live via www.billabongpro.com