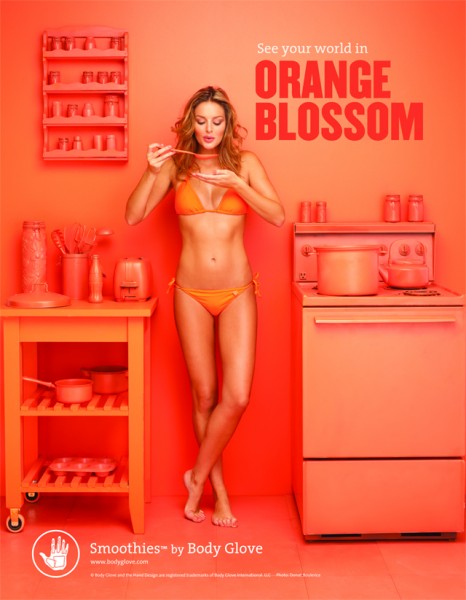 This season, Body Glove invites people to “See Your World in a Whole New Color” – a Smoothies color that is. The surf industry pioneer and manufacturer of women’s swimwear recently launched a new ad campaign for their iconic Smoothies line of bright, solid-colored swimsuits.

Body Glove wanted to reinforce the Smoothies brand in the minds of consumers and felt that a new, creative ad campaign was the lynch pin in achieving that goal.

The ads depict a series of scenes in which a model wears a Smoothies bikini in an unexpected context such as a kitchen or living room. The objects that surround her are all the exact same color as her swimsuit, painting a surreal yet playful picture of a young woman experiencing her world for that brief moment in her favorite Smoothies hue.

“We wanted to communicate the feeling a woman gets when she buys a new piece of clothing that she loves. She brings it home, takes it out of the shopping bag, and tries it on. Whether she is anywhere near the beach at the time is secondary. For that short moment, she is experiencing her new purchase and making it her own. There’s an element of imagination and excitement there that we wanted to reinforce with this campaign” said Noah Gellis, Vice President of Body Glove Sales and Marketing for swimwear and apparel.

For more information on Body Glove products and athletes go to www.bodyglove.com and for daily updates visit Body Glove on Facebook.