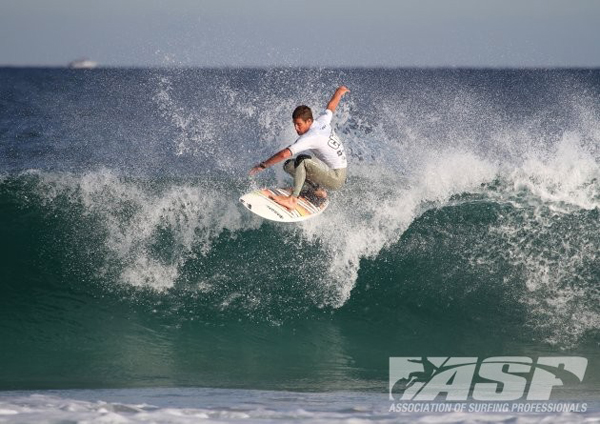 “I’m feeling pretty devastated at the moment,” Cathels said. “I’ve torn my front syndesmosis ligament and partially tore the back syndesmosis ligament. Hopefully I’ll be ready for the Australian Open at Manly. I definitely want one of the Aussie boys to take out the event and the ASP World Junior Title and keep the trophy at home, because I think at the moment the world’s best juniors are coming out of Australia.”

“I’m good mates with Davey (Cathels) and I spoke to him yesterday, he’s pretty shattered,” Parkes said. “To put in all the hard work and get injured a few days before event is very unlucky. It’s kind of given me the extra motivation to do well now that I’m the highest ranked Australian in the event. I’ve been surfing, and training every day, trying to surf right point breaks as much as possible to prepare and I’m feeling pretty good.”

Matt Lewis-Hewitt (New Zealand) will be the injury replacement for Cathels and is currently organising a last minute trip across the Tasman to compete in the last junior event of his career.

“I’m stoked to get in the event, but gutted for Davey (Cathels) too,” Lewis-Hewitt said. “I’ve surfed in some events at home and at the ASP 4-Star in China earlier this year, so I’ve already had a few warm up heats and am feeling good.”

Soli Bailey (Byron Bay, NSW/AUS) has been awarded a sponsor’s wildcard into the Billabong World Junior Championships Gold Coast and is looking to make the most of it.

“I’m thrilled to get this wildcard!” Bailey said. “To be able to surf in such a big event and get the chance to show people what I’ve got is amazing. I don’t surf Burleigh that often, but I’ve surfed it enough to know where to sit and I surf right hand point breaks all the time, so I’m feeling good and hoping to make it through couple of heats.”

Mitch Parkinson (Coolangatta, QLD/AUS), Peterson Crisanto (Brazil), Jack Robinson (Margaret River, WA/AUS), Mateia Hiquily (PYF) have been awarded wildcards into the men’s draw of the Billabong World Junior Championships Gold Coast. They will be joined in the main draw by 2 surfers from the Von Zipper Trials.

The Von Zipper trials will be held on Friday 20 Jan. The Billabong World Junior Championships Gold Coast will be webcast live via www.billabongpro.com