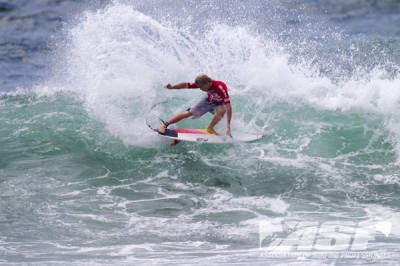 After exciting events in Bali and Brazil the 2011 ASP World Junior Tour moves to Burleigh Heads, Australia for the Billabong World Junior Championships. This is the event’s first year at Burleigh Heads after previously running at classic surfing locations such as Sydney’s North Narrabeen, Victoria’s Phillip Island and Maui’s Honolua Bay. Burleigh is the ideal location for crowning an ASP World Champion as it’s the location where man-on-man competition surfing was born at the 1977 Stubbies.

Queensland Premier Anna Bligh welcomed the world’s best junior surfers to Queensland, and highlighted the positive impact the event will have on the State’s tourism industry.

“Hosting this event at the iconic point break of Burleigh Heads is a real coup for Queensland,” said Ms Bligh. “With the Billabong World Championships joining a string of great events on the Gold Coast including the Breaka Burleigh Pro and the 2012 ASP World Surfing Awards. Attracting world class major events is part of our plan to continue building Queensland’s bright future. We look forward to welcoming the top international junior surfers to the Gold Coast in 2012.”

Davey Cathels (North Narrabeen, NSW/AUS), winner of the first event on the ASP World Junior Tour in Bali and current equal first on the ratings is looking forward to the tour coming to Australia.

“I’ve been surfing at home and doing a lot of fitness training with my mate Dave Kennet and I’ve been doing some mock heats and surfing with Nathan Webster, so I’m feeling good,” Cathels said. “Winning the ASP World Title would be massive! Not many people get to say they’re a World Champion and that’s something I would cherish for rest of my life. I love the Gold Coast and Burleigh is a lot of fun, and I think heaps of my friends are gonna come up and watch.”

Caio Ibelli (BRA) took out the second event on the ASP World Junior Tour in his home country of Brazil and shares the lead on the ratings with Cathels. Ibelli is excited to be a contender and looking forward to seeing how the title race unfolds.

“I’m felling very stoked to be coming back to Australia to compete in the Billabong World Junior Championships,” Ibelli said. “I don’t feel any pressure, my mind feels good coming into this event. I only want to get good waves at Burleigh and have fun in the water. Last year I spent 4 months in Australia so I had lots of sessions at Burleigh. I’m a regular footer so I feel really comfortable out there and I can’t wait to surf Burleigh again!”

Jack Freestone (Gold Coast, QLD/AUS) reigning ASP World Junior Champion is still in the title race with an outside chance of being the first surfer to win back-to-back ASP World Junior Titles. Despite needing the front runners to exit the event early Freestone can’t be ruled out of the race, especially as final event will be held in Freestone’s hometown.

“I live just over the hill at Currumbin and surf Burleigh whenever I can,” Freestone said. “To compete for a World Title in front of my family, friends and supporters is a dream come true and a challenge that I’m looking forward to. I’d love to win back-to-back ASP World Junior Titles, but that’s not my main focus because there are a lot of scenarios that need to play out for that to happen. My focus is to compete and surf the best that I can and hopefully that’s what it takes to the win the Title or the event or both.”

“I feel pretty good, I’m already on the Gold Coast in order to train and prepare for the event,” Defay said. “It is true that French have had success in this event and I think it’s an honour to be in this position and say that I might be next on the list! But it’s just a might! I just try to not think too much about it and not put pressure on myself.”

Dimity Stoyle (Sunshine Coast, QLD/AUS) is another consistent performer on the ASP Women’s World Junior Tour after a 2nd and a 5th place finish in the first two events. Stoyle will be looking to capitalise on the tour coming to her home state of Queensland.

“I’m pretty excited for Burleigh, it’s going to be a tough event,” Stoyle said. “I haven’t surfed Burleigh that much, but it’s a really fun wave when it’s on, so I’m really hoping we get some good waves. The pressure is definitely on for everybody, it’s the final event and it’s pretty close between the top few so it’s going to be a great contest!”

The Billabong World Junior Championships Gold Coast will be webcast live via www.billabongpro.com