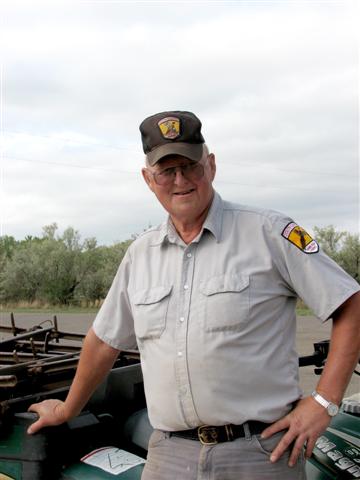 “All it needed was some improvements,” said Dallas Ingles of Shadehill Recreation Area, recalling his first impressions of the park he was hired to manage in 1977.

In those early days, Shadehill had eight campsites, a vault toilet and dirt roads. Campers even brought their own push mowers to mow their campsites before setting up.

To most, it needed much more than “some improvements.”

But to Ingles it was a dream-come-true.

“Building has always been my thing,” he said modestly.

It’s that legacy that Ingles left Shadehill as he retired earlier this month from the South Dakota Department of Game, Fish and Parks after a total 44 years of service.

Shadehill Recreation Area now has 66 electrical campsites, six camping cabins, a comfort station, rental lodge, boat ramps, fish cleaning station and paved roads. Most of the construction work was completed by park staff and the generous support of locals who pitched in. Almost no work was contracted out.

When Ingles started his career, there was very little money for park development.

“I was told that if I wanted any improvements I was going to have to figure it out myself,” he said. “We had to beg, borrow, and improvise somewhat to get things accomplished, but they got done, and it worked out for Shadehill.”

Shadehill is a popular state park are and has many returning visitors.

“There is nothing worse than throwing a party and no one comes. But in all my years, we haven’t had that problem here. People can’t wait to come to this park,” Ingles said.

Shadehill holds a special place in many people’s hearts, just as it does for the man who devoted 34 years of nights, weekends, and holidays to its upkeep and improvement.

“Shadehill Recreation Area has a clean lake, miles of shoreline and picturesque beauty,” Ingles said. “We have an abundance of wildlife, excellent hunting, good fishing and great people to work with. Then you take in the history of the area with its old stage routes, towns, homesteads, and prehistoric remains along the Grand River system. With such diverse recreational opportunities, there is something here for almost everyone.”

Upon retirement, Ingles and his wife, Jan, plan to continue to live in the Shadehill area, travel some, do a little fishing, and perhaps even some camping.

And no, he will not be mowing his own campsite.