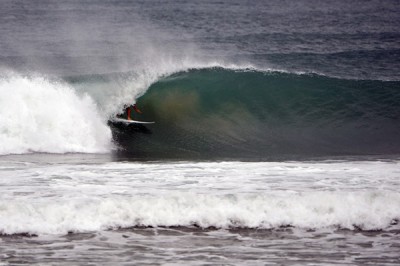 After yesterday’s conditions, competitors and organizers of the Association of Surfing Professionals (ASP) 4-Star World Tour Hainan Classic couldn’t have expected much better. But China continues to surprise and impress. When the first heat horn sounded this morning, conditions were bigger, the offshore winds were howling and the big scores started dropping early and often.

“It’s just getting better and better the bigger it gets and it’s just pretty much unreal for four guys to have a heat out there at the moment, especially for half an hour,” said Dion Atkinson (AUS), who won the opening heat of the Round of 32 with a score of 15.43. “It’s almost too long, your arms are pretty done by the end of it.”

As the day progressed on Day 2 the level of surfing continued to progress.

At some point during the day, surfers caught notice of the wave further up the point.

“During my heat I was watching the point and I saw all the guys getting barrels so after my heat I ran back up the point and just got a couple,” said Romain Cloitre (FRA), who was another heat winner in the Round of 32.

As if the day’s proceedings needed more excitement, Heat 6 of the Round of 32 witnessed the best wave of the event and the first perfect 10 of the event.

Already proving to be one of the in-form surfers in the competition, Marc Lacomare (FRA) took off on a six-foot set, and began the ride with a massive floater followed by a fins-free snap, which could have been the end of the ride, as he side-slipped down the face.

“I thought I was going to lose it, but I held on and saw this barrel and pulled in,” he explained.

After the full cover-up, he flew out onto the open face and made a swooping turn and punctuated the ride with a layback snap just as the way closed out.

“It’s good when everything comes together; that barrel was a nice bonus, so I’m stoked,” Lacomare said.

Competition resumes in the morning with the first heat of the Round of 16. According to the Surfline forecast, conditions are expected to hold steady, and the quarterfinals will also be run.

The webcast will be live at the sound of the first heat horn, at 9:00am local time (5:00pm PST – 8:00pm EST). Watch it online on www.hainaninternationalsurfingfestival.com/hainan-classic/live.