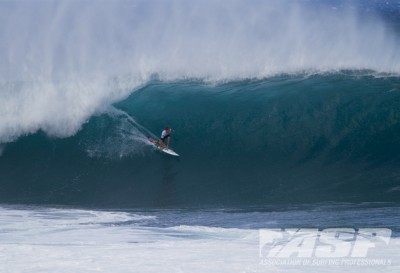 Kolohe Andino (USA), 17, has been a focal point in the surf-media spotlight as of late, and for good reason. After qualifying for the ASP World Tour at just 17, the young American will join the ASP Dream Tour’s list of global prodigies to showcase his talents alongside the world’s best. The Inertia just published an interview with Andino that talks about everything from being the son of a professional surfer, to his thoughts on partying to finishing his education to his family. This… is their story…

There is a lot of buzz around Kolohe Andino. There has been for a long time. He is an almost-World-Tour-rookie, surf royalty scion, the top of the new school class and mainland America’s great white hope in competitive surfing. He’s also 17. I gave him a call a few weeks ago at 10:00 AM HST, during the height of competition on the North Shore. The following interview is about what it’s like being a son, a pro surfer, an unabashed competitor, and a young guy trying to figure things out.

So where are you staying?
I’m staying at off the Target house near Off The Wall. Target bought a house three or four years ago out here. It’s the most I could ever ask for, the most I could ever have… the most I ever have had. Doing well over here is huge for someone’s career, so I’ve got to say thanks to them as well. They only have two surf riders so they also have a house a house for Carissa. She keeps some boards in the garage here are well, though.

Is it just you in the house?
There are a couple guys here working for Target. The team manager, JD Johnson, and a guy on the business end named Troy Michels. Then my Dad is here with me and my friend, Jeremy. My dad travels with me most places. If he’s not traveling with me, I’m with my coach, Mike Parsons.

Do you get tired of traveling with chaperones?
Not really. They help me a lot with my competitions, my surfing, and heat strategy. I think I’m at that age when I want to get my own identity and do some things on my own, but they both help me with a lot. To be honest, I think without my dad or Snips it (traveling) would be kind of a shocker. I watched a lot of guys try to do it on their own and it was difficult for them.

For the full interview with Andino log on to www.theinertia.com