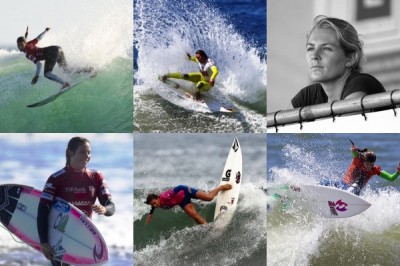 The 2011 ASP Women’s World Tour saw the most impressive group of female surfing talent in the sport’s history put on one amazing performance after another, proving that women’s surfing has reached new heights, without question. Carissa Moore (HAW), 19, made history, dethroning Stephanie Gilmore (AUS), 23, making her the youngest ASP Women’s World Champion of all time. The Top 17 saw the highly-awaited arrival of rookies such as Australians Tyler Wright (AUS), 17, and Laura Enever (AUS), 20, while Courtney Conlogue (USA), 19, landed as the first mainland-American contender on the elite ranks for the first time in years. With the arrival of fresh faces including Malia Manuel (HAW), 18, Californians Lakey Peterson (USA), 17, Sage Erickson (USA), 21, and Justine Dupont (FRA), 20, the talent pool on the ASP Women’s World Tour has gotten that much deeper for 2012. Below is a breakdown of the 2011 Top 5 finishers, and who knows who will rise to the top of the crop this year?

Carissa More: 19 year-old prodigy Carissa Moore had long been touted as a future ASP World Champ. The light-hearted Hawaiian found her feet amidst her sophomore year on the ASP Women’s World Tour, taking out three event wins while finaling in six of seven matches. Moore’s efforts made her the youngest ASP World Champion of all time, overtaking a seemingly unstoppable Stephanie Gilmore for the first time in half-a-decade. Arguably the most well-rounded female surfer on the planet, Moore’s mix of progressive maneuvers combined with her flawless rail-work and comfort in heavy conditions make the young Hawaiian the most deadly lady in a singlet. With an absolutely dominant season in her charge to the top last year, Moore will be the one to watch in 2012. Will Moore go back-to-back this year?

Sally Fitzgibbons: The cheerful sports-fanatic from Gerroa improved leaps and bounds on her third season amongst the Top 17, clinching her first three elite ASP Women’s World Tour wins at Bells, Taranaki and Huntington Beach, making four finals and giving Carissa Moore a serious run for her money in the hunt for the ladies’ Crown. Miss Fitzgibbons is one of the hardest workers amongst the Top 17 and with a Spartanesque training regimen, extreme focus, drive and talent, the 21-year old natural-footer will definitely be one to watch in 2012. Will Fitzgibbons take her first ASP World Title in 2012?

Stephanie Gilmore: After an amazing run of four-consecutive ASP Women’s World Titles, Stephanie Gilmore faced serious challenges last year from the next generation. A malicious attack suffered outside of her Gold Coast home in the off-season saw Gilmore return a bit out of sorts to start of 2011, but she returned to form as the year progressed, eventually winning the Roxy Pro Biarritz while finishing 3rd place overall. Constantly touted as the most stylish surfer on the ASP Women’s World Tour, Miss Gilmore is one of the most seasoned veterans amongst her peers. At only 23 years of age, Gilmore has logged an astonishing 18 elite event wins and three Vans Triple Crown titles in just five years on Tour. Her experience combined with her flawless fundamentals will no doubt make the polished natural-footer a serious threat for the ASP World Title for years to come. Will Gilmore take No. 5 in 2012? Time will tell…

Tyler Wright: Young Australian Tyler Wright entered 2011 as the most highly-talked about rookie on the Top 17 and backed up the hype, finishing off the year ranked 4th while clinching the coveted ASP Rookie of the Year award. With two elite victories before officially setting foot on the ASP Women’s World Tour stage, including the Beachley Classic at only 14-years old and the O’Neill World Cup of Surfing in 2010, the powerhouse immediately found her feet amongst the elite ranks, finaling at the Roxy Pro Gold Coast to start off her season. With her polished approach in all conditions and older brother Owen by her side, Wright could be a serious contender for the throne this season. Will 2012 be her year?

Silviana Lima: At 27-years young, Silvana Lima is the oldest surfer to finish within the Top 5 on the 2011 ASP Women’s World Tour, but with age comes experience. After spending six years on tour, the fiery Brazilian has notched three elite event wins while finishing runner-up to Steph Gilmore in 2008 and 2009. With a go-for-broke attitude and a skill-set that is constantly improving, Lima ups her game each year to challenge to youthful charge dominating the ASP Women’s World Tour. The light-footed South American is one of the hungriest women’s surfers on the planet, will 2012 be the year that she shakes things up and takes home the ASP Women’s World Title?

The 2012 ASP Women’s World Title Race will begin at the Roxy Pro Gold Coast, which holds a waiting period from February 25 through March 7, 2011.

For more information, log onto the World Surf League