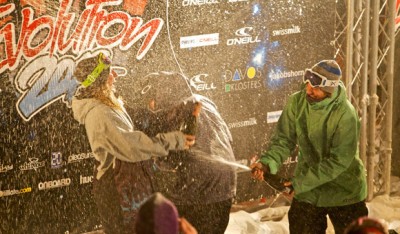 It was Anna’s last run that secured her spot on the podium. With a stylish Backside 540 Mute Grab and Frontboard to 50-50 Frontside Out on the rail, she surprised everyone, including herself: ’I can’t believe it, I am so happy! This morning I was very nervous, but during training, it all felt so good and I relaxed a bit more, that may have been it!’Spencer O’Brien, who locked in the highest score of 93.45 for her Frontside 720 Nosebone and a Gap Lipslide on the rail in her 2nd run stated: ‘I am super excited over my second win of the season, especially with a trick that I haven’t really done that much. It was a good time here in Davos!’

With record amounts of snow all week during the qualifications, it was a rather mild women’s final today weather-wise, but a powderwonderland nonetheless. As the snow started coming down more densely, things were heating up at the same time in anticipation of the men’s final.

Amongst a thrilled crowd of thousands, the men’s final was exciting down to the last run. Eric Willett lost his first and second run lead to Mark McMorris by only 0.30 points, with Mark performing a nearly perfect Backside Double Cork 1260 Mute Grab and Gap switch hardway to 270 out on the rail. None of the finalists were holding back in going BIG, which influenced the atmosphere amongst the spectators tremendously, giving the riders the necessary energy to perform.
Mark McMorris, who surprised himself today, commented on his win: ‘Eric rode insane, and would have deserved the win as much as I did.’

In the Big Air Tour ranking, Eric Willett grabs the lead from Roope Tonteri (FIN). Seppe Smits advanced from 12th to 5th position, remaining in his 5th position in the Overall Rankings. With his first Big Air result of the season here at O’Neill Evolution, Swiss rider, Christian Haller, advanced to the 1st position in the TTR Overall World Tour rankings. O’Neill Evolution was the last Big Air contest before the Big Air final Billabong Air&StyleFebruary 4th, in Innsbruck, Austria, where the TTR Big Air Tour Champion will be crowned.

The O’Neill Evolution Big Air results count on the qualifying road to the World Snowboarding Championships in Oslo, and was the last chance to gather points on the 6Star level. Riders have another few chances to qualify for the Halfpipe and Slopestyle disciplines of the WSC. The RedBull Nanshan Open in China is the last 5Star Slopestyle opportunity for men. A number of 4Star level events in both Halfpipe and Slopestyle provide further opportunities to collect points until the deadline on January 23rd, 2012. Check the full qualification information on: http://ttrworldtour.com/about/world-snowboarding-championships.html