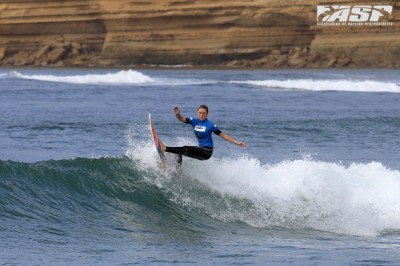 Victorian local surfer Nikki Van Dijk (Phillip Island, VIC/AUS) has taken out the first event on the ASP Calendar for 2012, the EVO Women’s Pro Junior Presented by Ghanda, over Bronte Macaulay (Margaret River, WA/AUS). Competition was once again moved to Jan Juc beach today where the surf was a crisp and clean 2 foot (1 meter).

Nikki Van Dijk (Phillip Island, VIC/AUS) was clinical in her attack throughout the entire EVO Women’s Pro Junior, using her trademark smooth snaps and carves to take the title and an early lead on the 2012 ASP Australasian Pro Junior Series ratings.

“It was so slow, but there was some good waves out there if you waited,” Van Dijk said. “Bronte (Macaulay) is so capable of getting good scores so I just tried to use my priority to catch the best waves. It feels so good to win an event at home in Victoria, especially being the first event of the year!”

Bronte Macaulay (Margaret River, WA/AUS) started the day with a big win over Ellie-Jean Coffey (Crescent Head, NSW/AUS) in the SemiFinals. In the Final Macaulay got off to an early lead, using her backhand attack to notch a couple of quick scores, but was unable to hold off Van Dijk as she built momentum toward the final siren.

“I came here with no expectations, I’ve never really done that well at competitions here before,” Macaulay said. “So I’m really stoked to have made the final! I was so nervous this morning, I’ve never made the finals before, the finals are great, you get to go wave for wave against each other with priority, I really enjoyed it!”

Naomi Stevic (Sunshine Coast, QLD/AUS) finished equal third today, but almost caused the upset of the event when she was in the lead against eventual event winner Nikki Van Dijk (Phillip Island, VIC/AUS) with only a couple of minutes left on the clock. Van Dijk found a last minute wave and earnt a score big enough to progress.

“I had priority and Nikki (Van Dijk) unfortunately snuck off to the left,” Stevic said. “The whole comp most of the good waves had been rights, so I let her go and then she got a good wave so she deserves to get through. But I’m definitely disappointed to have the lead for so long and not win, but that’s the way it goes.”