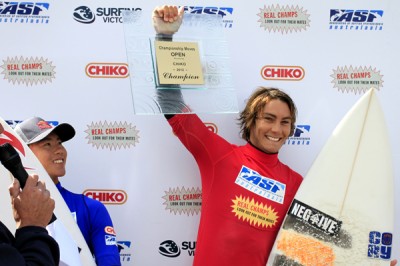 The 2012 Championship Moves Surfing Festival was treated to epic 4 foot (2 meter) surf at Bells Beach today for the crowing of event champions across the Men’s Open and Pro Junior divisions.

In stark contrast to the conditions at Jan Juc beach for the earlier rounds of the competition, today saw competitors doing battle at the world renowned Bells Bowl, with rail carves and power hacks earning the biggest scores from the judging panel.

Jordi Watson (South Coast, NSW/AUS) took out the Championship Moves Open after finishing runner-up in the Pro Junior Final earlier in the morning. Watson consistently posted big scores throughout the entire Championship Moves Surfing Festival, but hit another gear in the long, clean walls at Bell Beach this morning.

“I feel like I’ve been surfing good all week, so it feels unreal to make it into both Finals,” Watson said. “In the first Final Wade (Carmichael) got all the best waves, and it made me even hungrier to take out Championship Moves Open Final. I had a back injury last year and I’ve been working heaps, so to come down here and surf well I’m so stoked.”

Wade Carmichael (Central Coast, NSW/AUS) came into his own on the big open walls at Bells Beach this morning, unleashing long drawn out carves and explosive in the pocket snaps to take his 2nd win on the ASP Australasian Pro Junior Series.

“I’s been 2 years since I won an event, so this feel great!” Carmichael said. “I’ve been training and working hard for this so it’s good to have it all pay off. I’ve always loved Bells, it’s similar to some waves at home it seems to suit my surfing. My strength is power surfing so I’m glad I made it through the smaller days at Jan Juc, because to surf waves like that win the final is a dream come true!”

Hiroto Arai (Japan) finished as one of the most in-form surfers of the event after taking home a runner-up finish in the Championship Moves Open and an equal 3rd place finish in the Pro Junior. The young Japanese surfer showed a lot of promise on the Bells Bowl and will be one to watch at future events.

“This is my first time to Victoria and my first time surfing Bells and it’s pretty difficult,” Arai said. “My team manager helped me know where to take off and I was able to get some really good waves. I’m so happy, everyone surfed to good all event so to make the Final of a ASP Star event and Semifinals of the Pro Junior is very good for me.”