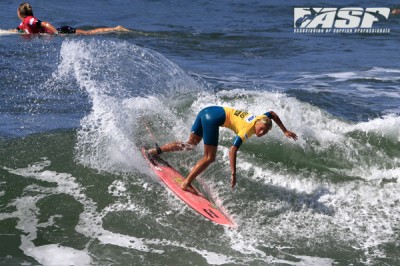 Ellie-Jean Coffey (Crescent Head, NSW/AUS) used her sharp backhand attack to carve up the right-handers to advance to the SemiFinals today. Coffey will now face Bronte Macaulay (AUS) in SemiFinal 1 when competition resumes.

“I feel good, the waves are pretty fun out there,” Coffey said. “Last year I did a lot of travelling with Billabong and didn’t do many competitions, but this year I’m going to do all the ASP Pro Juniors and a few Star events and focus more on competing so this is a great place to start. It’s good for your confidence to start the year with a good result, but as long as you’re feeling good and having fun – nothing else matters.”

Nikki Van Dijk (Phillip Island, VIC/AUS) did her home state of Victoria proud by advancing to the SemiFinals. Van Dijk systematically sliced the waves apart and left her competitors in her wake and will now face Naomi Stevic (AUS) when competition resumes.

“I was lucky because I picked off a few that reeled off,” Van Dijk said. “The waves were good and the water is warm, so it was fun out there. We’ve had the best waves at home lately so I’ve just been cruising, and going into a competition I like to be relaxed so that summertime at home has done that for me.”

Creed McTaggart (Margaret River, WA/AUS), the young West Australian earnt the highest heat total of the event thus far, 16.50 (out of a possible 20) with a mixture of stylish and radical manoeuvres.

“When I first got out there I was a bit lost, I didn’t know where to sit,” McTaggart said. “I just lucked into a couple running-rights that didn’t really break out the back but stood up on the inside. You’ve got to be pretty lucky out there, it’s kind of all over the joint, but you can get some nice sections for sure.”

Rory Jenkins (Cronulla, NSW/AUS) also impressed the judges with his smooth style and ability to link up turns in today’s tricky conditions.

“I just sat a bit wider than everyone else and got a few,” Jenkins said. “I’m feeling good and hoping to have a good year on the ASP Junior Series this year, I really want to get on track and make the top 15 at least, so we will see how that goes.”

“I feel pretty good,” Styman-Lane said. “I just waiting for a good waves all day and tried to make the most of them. This is my best result in a ASP Pro Junior event so I’m excited and looking forward to the next event.”

The Championship Moves Open and Pro Junior Presented by CHIKO will run from Jan 5th to Jan 9th.

The EVO Women’s Pro Junior Presented by Ghanda will run from Jan 5th to Jan 8th.