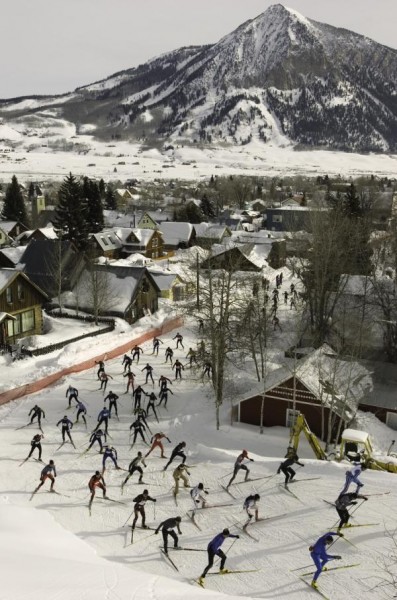 The 26th annual Alley Loop and 15th annual Elk Mountains Grand Traverse are two distinct ski races that have helped put Crested Butte, Colo., on the map as a place that does everything with its own unique style.  Both have new happenings to announce for 2012 and are spearheaded by Crested Butte Nordic Center.

Alley Loop, February 4
Growing in prestige and numbers over the past decade, the Crested Butte Nordic Council’s Alley Loop has been selected to join the American Ski Marathon Series (ASM Series), North America’s longest-running and largest citizen’s racing and touring series.  Already an American Birkebeiner qualifier, the Alley Loop drew more than 550 skiers from 17 states in 2011.

With 14 races from Vermont to Alaska, the ASM Series includes such renowned events as the American Birkebeiner, Yellowstone Rendezvous and Tour of Anchorage.  The Gunnison Valley Health Alley Loop is one of only four races in the western United States and the only Colorado event in the series.  “We’ve been wanting to add another western event for a number of years,” says J.D. Downing, director of the American Ski Marathon Series, “and the Alley Loop ended up being the perfect fit.”

The 26th annual Gunnison Valley Health Alley Loop, known for its fun spirit and participation from both serious and not-so-serious costumed racers of all ages, is scheduled for Feb. 4, 2012.  The competition is distinguished by a unique course that starts and finishes on the town’s main street, Elk Avenue, before meandering through snow-lined alleys, behind false-fronted Victorian buildings, over footbridges, alongside residences and out to groomed trails in the outskirts of town.  Ranging from 1.5 and 3 kilometer races for children and families to half and full marathons, crowds line the streets and alleys to cheer on racers.

The 1.5 and 3 kilometer races begin at 9:30 a.m., and the rest start at intervals beginning at 10 a.m.  New Belgium Brewing’s Taste of the Alley Beer Garden on the deck of the Brick Oven offers a great spot to watch the action and socialize from noon to 4 p.m.  Registration is now open on the Crested Butte Nordic Center’s website at www.cbnordic.org. Complete information about the ASM Series can be found at www.xcskiworld.com.

Elk Mountains Grand Traverse, March 29 – 31
One of the most sought-after and rugged backcountry ski races on the planet celebrates 15 years of memorable moments and amazing athletic feats on March 29 – 31.  The GORE-TEX Elk Mountains Grand Traverse presented by Outdoor Research and Dynafit follows historic mail routes that connected the Colorado mining towns of Crested Butte and Aspen in the 1880s.

Kicking off at the stroke of midnight on March 30, the Grand Traverse is a one-of-a-kind test of endurance and smarts, requiring avalanche awareness, backcountry athleticism, winter camping knowledge and map reading skills all wrapped in one.  This unusual start time is scheduled so entrants will reach the high point of Star Pass at 12,303 feet before the warmth of the day increases the likelihood of avalanches.  The 40-mile course starts at 9,000 feet at Crested Butte Community School and traverses to Crested Butte Mountain Resort, where cheering crowds greet racers as they pass through the base area just below the Silver Queen lift.  After conquering two mountain passes, the teams finish at the base of Aspen Mountain ski area on March 31 and celebrate that evening with a cocktail party, dinner and awards in Aspen.

“The Grand Traverse is not a Nordic or downhill race, but instead tests skiers overall skills and goes from town-to-town, covering 40 miles of rugged trails in the Elk Mountains. Every event dishes up new surprises for contestants and organizers,” says Keith Bauer, director of the Crested Butte Nordic Center, which has assumed responsibility of the race from a group of longtime volunteers.

A two-day registration and expo are new for this year.  Because of the remote route, each team of two is required to carry enough food and supplies to sustain themselves for 24 hours. Upon registration, the team’s packs are checked for essential gear such as a two-person shelter, stove, fuel, shovel, probe, first-aid kit and equipment repair items.

Sponsors Dynafit and Outdoor Research will have product demonstrations available at the base of CBMR, and racers can take part in a “skin with the pros” on March 29 from 4:30 to 6 p.m. and March 30 from 7:30 – 9 a.m.  The tour will follow the section of course that crosses CBMR terrain and give competitors a chance to do some final equipment tweaks with the help of experienced Grand Traverse racers.  On Thursday evening, race organizers will have a film festival featuring backcountry ski movies at the Lodge at Mountaineer Square, which is free to all racers and open to the public for $8 per person.

Registration for the Grand Traverse sold out within 30 minutes on Dec. 1, with 150 teams of two filling the slots.  To see if any openings become available, watch the Elk Mountains Grand Traverse Facebook page.  Trackleaders will provide SPOT-based so the progress of all racers can be monitored on www.elkmountainstraverse.com and www.trackleaders.com.