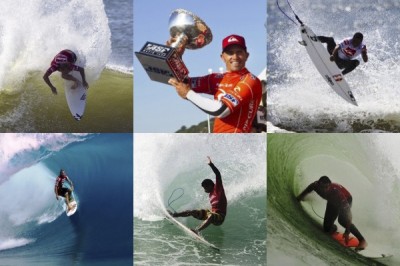 2011 has come and gone, delivering nothing short of one of the most exciting and talked about seasons the tour has ever witnessed. We saw bombing conditions at Teahupo’o and Pipeline, rippable surf in New York and San Francisco, and landmark swells at Bells and Supertubos. We saw the ascension of Kelly Slater (USA), 39, to the annals of sport history with an unprecedented 11th ASP World Title. We saw the announcement of a new guard of challengers including Owen Wright (AUS), 21, Michel Bourez (PYF), 26, Josh Kerr (AUS), 27, Julian Wilson (AUS), 23, and Alejo Muniz (BRA), 21. We saw the continued adaptation and high-performance of perennial threats such as Joel Parkinson (AUS), 30, Taj Burrow (AUS), 33, Adriano de Souza (BRA), 24, and Jordy Smith (ZAF), 23. We saw the preternatural performances of rotation kids Gabriel Medina (BRA), 18, Miguel Pupo (BRA), 20, and John John Florence (HAW), 19. 2012 is now upon us and 2012 is a question mark. Will we see the end of the Slater era? Will the world’s greatest surfer continue to outperform the next generation of talent? And if not, who will challenge for the throne? What follows is a breakdown of the 2011 ASP World Title Top 10…Watch the Throne…

Kelly Slater (USA): 39 years old. 48 elite tour victories. 11 ASP World Titles. Robert Kelly Slater has been surfing’s “next best thing” for the past two decades. He is considered one the most dominant figures in all of sport…and he’s exhibited no sign of slowing down. Boasting incredible fitness and an ability to adapt to the ever-evolving performance level on the ASP World Tour, Slater is as dangerous as he has ever been in his career. However, the motivation to contest an entire season may be lacking as the iconic Floridian looks to transition to the next phase of his life. A guaranteed appearance at the season opener on the Gold Coast will see the great one don a singlet once again and his result at the Quiksilver Pro will likely set Slater’s pace for the season. Question is, when (IF) Kelly walks away, who will be next to ascend the throne?

Joel Parkinson (AUS): With 11 seasons amongst the world’s best under his belt, 30-year-old Joel Parkinson has finished Runner-Up four years (’02, ’04, ’09, ’11). The concept of being within grasp of the ASP World Title four times in one’s career is near unfathomable and would break most mortals. Fortunately for the surfing world, the man with arguably the greatest rail game in the world is not “most mortals”. Parkinson is hungry, fit and surfing at the height of his powers. If he can stay injury free in 2012, we may very well see what so many have waited to see for so long…a Parkinson atop the year-end ratings.

Owen Wright (AUS):In 2011, 21-year-old Owen Wright announced his intentions to the world when he went made the Finals in back-to-back-to-back events against Slater, taking him out in New York and narrowly losing at Teahupo’o and Trestles. That said, Wright has well and truly proven himself capable of taking out events in any and all conditions. One of the most well-rounded surfers on the planet, the progressive goofy-footer will be licking his chops at the addition of Tavarua to this season’s schedule and the rest of the ASP Top 34 will have to collectively lift their games if they’re to keep up with the kid from Culburra in 2012.

Taj Burrow (AUS): Burrow was once quoted as rhetorically pondering his affection with the ASP World Tour as “how do you get off this ride?”. And “ride” may very well sum up the 33-year-old’s 13-year tenure challenging for the title. Burrow is one of those rare individuals who has been considered an ASP World Title threat since his rookie year, but the ageless natural-footer from West Oz has only gotten as close as Runner-Up twice (’99, ’07). From the start of 2011, the remainder of the Top 34 fixed their gaze on Burrow as he was “surfing better than he ever has” (to quote virtually every surfer on tour). While Taj continued to amaze surf fans around the world last year, he didn’t reach the podium until the ASP Prime event at Haleiwa. These days, to win the title, consistency isn’t always enough. One needs podium finishes at the elite level to break the spirits of his/her fellow challengers. Taj is more than capable of this and we may just see it in 2012.

Adriano De Souza (BRA): In a word: “passion”. De Souza has single-handedly changed the way the world views Brazilian surfing while clearing the path for the next generation of South American talent. Adept at airs, turns and barrels, the former ASP World Junior Champion is entering into his sixth consecutive year amongst the world’s elite (at only 24 years young too). De Souza has the drive and ability to be an ASP World Champion. The challenge for him over the coming years will be maintaining his dominance as the talent level continues to soar.

Michel Bourez (PYF): Ever since ‘The Spartan’ rampaged through the qualifying series in 2008, the world has been expecting big things from the powerful Tahitian. After finding his feet throughout his rookie and sophomore years, Michel Bourez was a picture of consistency in 2011, finishing Equal 9th in the first five events of the season. After a midyear slump, Bourez punctuated the remainder of the year with back-to-back Quarterfinal finishes in Europe and an Equal 3rd at Pipeline. Owner of one of the most powerful turns in the business, Michel is especially lethal at the reef passes (oh hello Tavarua!). Bourez has finished 21st, 11th and now 6th in his tenure amongst the world’s elite and if he can get off to a speedier start in 2012, we may see the Spartan challenge for the throne.

Jordy Smith (ZAF): There are not too many surfers out there that can blow past the world’s best surfers at only 80%, but Durban’s Jordy Smith is one of these surfers. The big South African was once again in the title hunt throughout the first half of the season, but a mid-season injury in Tahiti derailed his campaign as he had to sit out at New York and Lowers (two events we would have liked to see him at). Throughout his four-year tenure amongst the ASP Top 34, Smith has shown the world many faces: progressive rookie, disinterested party boy and now a legitimate ASP World Title contender. His fitness level has never been higher and his talent is undeniable. We’ll have to wait and see what face Jordy turns up with in 2012.

Josh Kerr (AUS): From fly boy to…well…fly boy. Australian Josh Kerr has long been considered one of the best aerialists in the world, but his tube sense and big wave bravado have long been overshadowed by his above-the-lip prowess. Until now of course. Kerrzy proved himself at the 2011 heavy water spots and his rail game has improved significantly since he first took a shot at the ASP World Title back in 2007. Now well inside the ASP Top 10, Kerr will have to deal with the expectation of his fans and the judges while figuring out where he goes from here. Is the headline “Josh Kerr Claims 2012 ASP World Title” outside the scope of reality? We’ll have to wait and see.

Julian Wilson (AUS): Some people are given a lot in this world. Some people have to work for everything they get. The Sunshine Coast’s Julian Wilson is someone who can fall into both categories. Oozing with natural ability, it was Wilson’s work ethic and determination that saw the young natural-footer rebound after a slow start to the season to bag an ASP Prime win in Portugal and then post a Quarterfinal finish at Jeffreys Bay before blitzing the back half of the season. His efforts garnered him the ASP Rookie of the Year title and his charging at the season-ending Billabong Pipe Masters has been burned into the memories of the world’s best surfers. Wilson makes no apologies about his motivation at the top of the sport: he’s here for the ASP World Title. 2012 may be the year we see something special.

Alejo Muniz (BRA): The second rookie to crack the Top 10 on the ASP World Title rankings and the man no one saw coming. Of course, anyone who had spent some water time with Muniz prior to the 2011 season would attest to the fact that the young Brazilian is the complete package. Solid fundamentals with the ability flare his fins at will, the thing that sets Alejo apart from other newcomers is his ability to put up big results in a variety of conditions. Muniz made the Quarterfinals at Snapper Rocks, Jeffreys Bay and Hossegor and the Semifinals at New York and San Francisco. The one thing that plagued Alejo’s rookie season was inconsistency: for every Quarters and Semis finish, he would suffer a Round 2 or 3 loss. The kid’s smart and well aware of this and we expect a marked improvement in 2012, but he is a challenger for the throne?

This list obviously fails to mention the remainder of the ASP Top 34, but they should not be discounted. As Slater said, “At this level, any of these guys can win any heat,” and when that’s the case, the 2012 ASP World Title is truly up for grabs. With the deactivation of the midyear rotation for 2012, the current ASP Top 34 will compete for the entirety of the season, starting with the season-opening Quiksilver Pro Gold Coast from February 25 – March 7, 2012. Watch the throne…